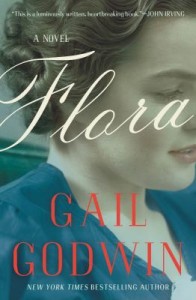 Helen Anstruther does not think highly of her Alabama relative, Flora. In Helen’s opinion, Flora is simple-minded and prone to regrettable emotional outbursts. At ten, Helen feels more mature than the unrefined, twenty-two year old Flora. Helen’s father Harry, an alcoholic and sharp-tongued high school principal, is no fonder of Flora than is his daughter. But after Nonie, Helen’s grandmother and primary parental figure, passes away Harry has a problem. He intends to spend the summer in Oak Ridge, Tennessee working on a top secret military project and needs someone to watch over Helen during his absence. Flora is his deceased wife’s cousin and his only viable choice left. Despite her perceived shortcomings, Harry asks Flora to spend the summer at their home in a fictional North Carolina mountain town during the close of World War II.

After a polio scare strikes the town, Flora and Helen remain shut away in the Anstruther house, Old One Thousand, which served previously as a convalescent home. The house is rich in material for Helen’s busy imagination. In fact, Helen’s curiosity often leads her into places she does not belong and to things that belong to others, like a series of letters exchanged between Nonie and Flora. Nonie and her father have raised Helen on a steady diet of sarcasm and disapproval. Helen finds fault after fault with Flora: her unflagging sincerity, her predilection for tears, her inability to drive. Fresh out of teachers’ college, Flora hopes to become a teacher, however her childlike nature and seeming dependence undercuts this ambition. Often Helen feels like the adult, guiding Flora and even helping her practice her skills by creating an imaginary classroom. Helen is a precocious child and has an acute awareness that Flora longs for her approval. Although Helen expresses contempt toward Flora, the two develop a fast friendship with their Irish grocery boy, Finn, that creates an uneasy triangle. By the end of the summer, those tense relationships reach a breaking point.

Godwin situates the novel from Helen’s perspective, as child and as adult. With the perspective of adult Helen, the book possesses an elegiac tone. The novel edges toward a coming-of-age story, except that the lessons come late to Helen, who mourns that as a child she missed the complexity of Flora’s true character. Godwin creates vivid yet realistic characters shaded through the eyes of Helen. She also depicts how children are influenced and shaped by their elders, for better or for worse.

This book, like many of Godwin’s novels, is set in Mountain City, which is widely thought to be modeled on the author’s hometown of Asheville, North Carolina. There are some instances of racist language and dialogue in the book.