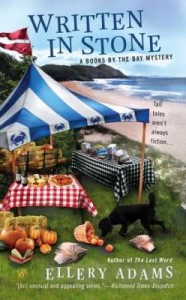 When Oyster Bay’s gossipy diner proprietor Dixie relays a message to Olivia Limoges from the reclusive witch of Oyster Bay, Olivia laughs it off as a bunch of hocus-pocus and horoscopes. The witch, Munin Cooper, wants Olivia to pay her a visit. Olivia is a successful restaurateur and aspiring author. She is a woman who takes care of herself and her constant companion, Captain Haviland, a standard poodle. However, when Olivia discovers that Munin Cooper inexplicably knows a private detail about her deceased mother she decides to brave the journey across the swamp to hear out the witch’s message.

According to local lore, the witch requires her visitors to relinquish their most precious belongings in exchange for her help. Most of Munin’s visitors are just desperate enough to part with their possessions. Tucked away in her shack, Munin embeds those trinkets and mementos into memory jugs. A memory jug serves as “a scrapbook made with found objects” that represent an individual’s life. Munin is an eerie figure. A member of the Lumbee Indian tribe, she lives in primitive but self-sufficient isolation and decorates herself with jewelry fashioned from teeth and small animal bones. She warns Olivia that death surrounds her and that she should protect herself and her friends before any terrible events occur. To help her fend off death, Munin gives Olivia her final memory jug. Despite her otherworldly wisdom, Munin does not realize that death will seek her out first. A park ranger finds her drowned in a stream shortly after Olivia’s visit.

After she learns of Munin’s passing, Olivia refuses to believe that the witch died from natural causes, so she urges Police Chief Rawlings to examine the case further. Because Munin lived in a different county, Rawlings cannot influence the ruling of accidental death. But Olivia knows it was murder and she has all the evidence she needs to solve the crime thanks to the memory jug. In order to identify the killer, she must first understand the relationships among the keepsakes in the jug. With the Coastal Carolina Food Festival gearing up, Olivia is overwhelmed with her restaurant, The Boot Top Bistro. Yet with her life and the lives of her friends in question, she juggles supervising her business and sleuthing a murder. As the web of connections grows clear and clearer, Olivia is shocked by what she unearths.

Novelist Ellery Adams delivers another absorbing mystery for her “Books by the Bay” series. Adams tantalizes her audience with snippets of Olivia’s mysterious back story. She supplies an enigmatic mix of details that will leave readers curious for the full explanation. Moreover, her lush descriptions of food are enough to make your mouth water and your stomach growl. This book should probably be read on a full stomach. For readers interested in more, consult three of the Read North Carolina Novels previous blog posts on Adams’ work: A Killer Plot, A Deadly Cliché, and The Last Word.