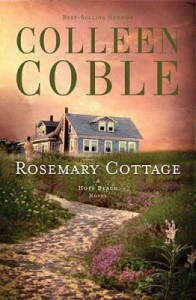 Novelist Colleen Coble has authored a second book in her bestselling Hope Beach Series. Interested readers should consult our blog post on the first novel, Tidewater Inn, if they would prefer to start from the beginning. However, Coble has written the novels so that readers can enjoy them independently from each other. Some familiar characters reappear in Rosemary Cottage, most notably, Libby Holladay, the archaeological historian and protagonist from Tidewater Inn. In this novel, Libby takes a backseat to Amy Lang. Amy has returned to the fictional Hope Island in the Outer Banks after her older brother Ben was killed in a surfing accident. She intends to stay at her family’s beach home, Rosemary Cottage, where she and Ben spent many blissful summers together.

Amy idolized Ben. She thought of her brother as a smart and hardworking man. Understandably then, the news of his recent death has left her in a state of shock. She has arrived at Rosemary Cottage under the pretense of mourning her brother and possibly relocating her successful midwife practice to the island, but she has another, hidden, agenda behind uprooting her former life. Amy received an anonymous e-mail claiming that her brother was murdered, and that he deserved his fate. Before the mysterious e-mail, Amy had her doubts about the accident. Ben was a strong swimmer and a skilled surfer. Police never recovered Ben’s body, but they did retrieve his shark-bitten surfboard. Even though the evidence indicated a simple and unfortunate accident, Amy believes a grimmer truth lurks beneath the surface.

Curtis Ireland, a Coast Guard officer on Hope Island, just lost his sister Gina in a devastating boating accident. Upon her death, Curtis became the guardian of Gina’s newborn daughter, Raine. Curtis is a dutiful uncle who loves his little niece dearly. He stepped up to the task of caring for Raine without any problems. That is, until Amy’s arrival. Curtis and his aunt Edith know the secret behind Raine’s parentage, and it could jeopardize their claim to Raine’s custody. Edith urges Curtis to approach Amy and reveal the secret, but Curtis is wary that Amy’s affluent family might barge in and wage a custody battle. Matters become more complicated when Amy approaches Curtis. She wants to investigate Ben’s death. Shortly after they partner up, they realize that Ben and Gina’s accidents might be interconnected. What they discover leads them to a tightly wound web of dark secrets and unexpected twists.

A romance between Amy and Curtis forms quickly, but the potential relationship is troubled almost immediately by the tension of uncovering harsh realities about Ben and Gina. Neither Amy nor Curtis want to see their beloved sibling in a negative light. Hostilities flare when Curtis suggests that Ben might not be the great man Amy believed him to be. Moreover, as Curtis feels increasingly attracted to Amy, she pushes him away. Amy possesses an unpleasant secret of her own, one that prevents her from growing closer to Curtis despite their clear chemistry. In the midst of their unofficial investigation, the island is busy with a campaigning senator and the arrival of an unusual new girl seeking work. Will Curtis and Amy uncover the truth with all the distractions and complications surrounding them? If they find the truth, will they regret that they went hunting for it in the first place?