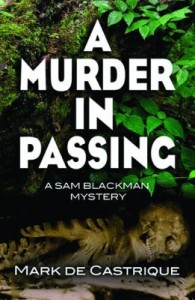 Readers of the previous novels in this series know that author Mark de Castrique serves up engaging mysteries that are rich with literary and local history.  These novels are not just set in North Carolina, they weave our state’s history into the plot and the characters.

In A Murder in Passing, de Castrique introduces readers to the Kingdom of the Happy Land, a communal settlement of former slaves that existed on the North Carolina-South Carolina border in the late nineteenth century.  Detectives Sam Blackman and Nakayla Robertson are at the kingdom site for a mushroom hunt when Sam trips onto a fallen tree and discovers a skeleton. The skeleton is a big story on a quiet news day in western North Carolina, and soon Sam is once again the subject of a lot of talk. Coincidentally (or maybe not), the Blackman & Robertson Detective Agency is approached by Marsha Montogmery who wants them to find a rifle and a photograph stolen in the 1960s.  The photograph was made in the 1930s by the famous photographer Doris Ulmann at the site of the Kingdom of the Happy Land.

When Marsha’s mother, Lucille Montgomery, is arrested for the murder of the man whose body Sam discovered, it’s clear that the two crimes are linked–but how? The police don’t even have a proper ID of the victim, so they attempt to obtain DNA evidence from the family of Jimmy Lang, the man who was Lucille’s lover–and Marsha’s father.  This brings the story of America’s racial history closer to the present–to the time of the U.S. Supreme Court ruling in Loving v. Virginia. Did Lucille kill a man who now could, but wouldn’t, marry her, or did someone else kill him to prevent him from making a new life with Lucille and Marsha?  Family relations are under the microscope in a mystery that invites readers to consider how true Faulkner’s famous quote–“The past is never dead. It’s not even past.”–still is.

Regular readers of this series will be happy to know that interspersed with the business of the mystery are interludes with some of the characters from previous novels such as the lawyer Hewitt Donaldson, an antagonist deputy sheriff,  Sidney Overcash, and Ron Kline from the Golden Oaks Retirement Center.  De Castrique also introduces a promising new character, an injured young veteran Jason Frettwell, who is in rehab at the Asheville V.A. center.