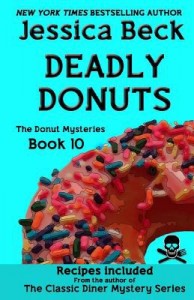 Thanks to the summer heat, Suzanne Hart’s donut sales are lagging. Turns out nobody in April Springs craves a freshly fried donut and a piping hot cup of coffee with sky-rocketing temperatures and soupy humidity that keep them just as shiny as Suzanne’s glazed donuts. So her shop, Donut Hearts, has been quiet, verging on deserted. Suzanne doesn’t mind the lack of foot traffic. She is glad to have her college-aged assistant Emma out of classes and in the shop and she maintains high spirits despite the disappointing turn in business. Unfortunately, her most recent customer delivers a nasty little treat. The mystery man alleges to have proof that Suzanne’s father was a cold-blooded killer. After a bit of initial contempt, Suzanne arranges to meet the mystery man beneath the town clock at one in the morning to see his supposed evidence and decide if his half-baked claim is truer than she would like to believe. If it is true, then it might just cost Suzanne more than she can afford.

Unfortunately, when Suzanne meets the mystery man under the clock at the designated time, she finds him – very dead. Minutes after Suzanne arrives on the scene and stumbles upon the unlucky corpse, the cops show up. At first things don’t look good for Suzanne, but then they look even worse for her mother who was suspiciously absent prior to the murder. Yet again, Suzanne and her closest friend, Grace Gauge, start examining the case. Suzanne is determined to find out who murdered the mystery man and if, in turn, his allegations about her father were accurate. As Suzanne and Grace sniff out all the possible leads, they discover that Suzanne was not the only person the mystery man tried to blackmail.

Meanwhile, Suzanne’s philandering ex-husband, Max, begs for her help. Max claims he is a changed man. The changes, he insists, are all due to his love for Emily Hargraves, the owner of Two Cows and a Moose, the local newsstand. Emily is a peculiar character with a whimsical penchant for dressing up her stuffed animals (two cows and a moose, of course) in costumes. Max has resolved to abandon his slick charm if can get a chance with Emily. He waxes poetic about his newfound love and sincerity. But since his odds seem weak, he is hoping for reinforcement. More specifically, Suzanne. Unwittingly, Suzanne is pulled into playing matchmaker for the very odd pairing. She has no qualms about lending Max a hand, but she is surprised that another woman could truly reform her chronically charming ex-husband.

This is the tenth installment in Jessica Beck’s Donut Shop Mystery series. If you’re new to the series, jump back to this blog post that covers the first book, Glazed Murder. Beck wields self-reflective humor by referencing the cozy mystery sub-genre on a few occasions throughout the novel. In one particularly navel-gazing instance, Suzanne quips that her mother had “even read a series based on a donut-shop, of all things.”

Beck offers four enticing donut recipes: two traditional recipes from scratch and two recipes relying on some prepackaged ingredients, which should satisfy readers of all cooking levels. She integrates the recipes within the text of the story. If you’re based in the Triangle area and don’t feel in the mood to slave over a deep fryer, then you could always enjoy this book over some Monuts or Rise donuts and coffee! 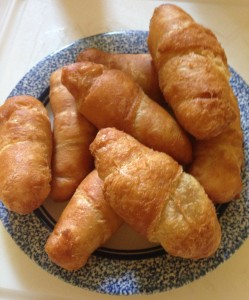