“I’ve been thinking that all of this lawyering is stupid, that Sean and the others should just open their mouths for a scraping and get it over with. But now I get it. What you’ve always tried to say, Daddy. Being innocent isn’t enough.” 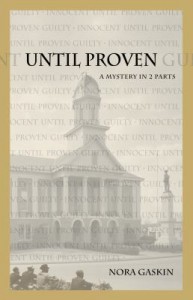 First-time novelist, Nora Gaskin, weaves a powerful family drama in two parts. In 1963, Colin Phillips is more or less happily married to Rhetta Phillips, née Vance, and is dedicated to his two daughters, Eden and Wren. The Vance family is a wealthy Southern line, one that Colin, a poor boy from a mill town, managed to marry into. Colin provides for his family by working as a lawyer. Recently, Colin has agreed to represent clients pro bono if they were arrested while carrying out acts of civil disobedience. Rhetta and Colin do not see eye-to-eye on the shifting racial climate, and she is especially displeased by the news of Colin working for free since he insists that she not dip into her inheritance to support the family. But Rhetta accepts the arrangement quietly.  She has news of her own that will alter their family permanently.

Rhetta’s bachelor twin brother, Laurence, intends to return from London and live in the family guest cottage for an unspecified amount of time. Laurence has no official occupation aside from sporadic traveling and writing. While Colin feels affable distance toward Laurence, Rhetta is consumed with protective sisterly affection. For a time Laurence writes and loafs about town, then, mysteriously one day, he brings home a wife, Shelia, a librarian at the local university. He soon departs the guest cottage to establish his household. Laurence hires a local boy, Jabel Clark, to help him and Shelia spruce up their home. Jabel graduated second in his high school class, but has decided to wait to apply for college. He hopes to save money for his guardian and grandmother, Marie Minton, before he thinks of furthering his education. Marie once worked as the Vance family housekeeper and cared for Rhetta and Laurence as children. The arrangement seems to work well, at first. However, some of Laurence’s deepest secrets are revealed to Jabel, and then Shelia is found murdered. As a court case involving Laurence and Jabel gears up, family tensions run high, racial intolerance emerges, and the situation turns ugly.

In 2003, the novel resumes with the next two generations. Although the wounds of the previous case appeared to have scabbed over, one more good scratch rips them open again. Without revealing any crucial spoilers from the first half of the story in 1963, another girl is found murdered in her home and relatives from the same families are implicated in the crime again. The families are left tip-toeing around each other as the court case looming in the near future. Until Proven is packed with great tension and unexpected twists that will keep readers entranced until the final page. Gaskin delves into the dark side of family loyalty, exploring how far the bounds of truth and justice can be stretched in the name of protection and devotion.

Look at this interview in The Daily Tar Heel for more information on the author and the inspiration behind her story.