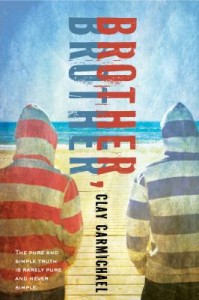 Mem always had two rules for Brother: “Never assume anything and Pay attention, pay attention, pay attention.” When he came home late and tired after working at double shift at The Elms Rest Home and then getting into a fight with his best friend, Cole, seventeen-year old Brother didn’t think to check in on his grandmother. The next morning he found her dead in her bedroom. Mem’s death was not a total surprise to Brother. She had been sick with breast cancer and the doctor estimated she had only weeks left. But her death was still a blow. Mem raised Brother as his adoptive mother after Brother’s birth mother left him with Mem as a toddler. His mother died in a car accident soon after she passed Brother over to Mem. His father’s identity remains a mystery. The truth died with his mother. Or so Brother thought. That identity might not be a secret for much longer.

Brother discovers from the undertaker, Bayliss, that Mem had a newspaper in her bed when he came to take her body. The newspaper contained an article about the reviled Senator Gideon Grayson, and his son Gabriel, who recently suffered an overdose. Mem was the housekeeper’s daughter for the Grayson family. But that’s not the eerie part. Gabriel and Brother are spitting images of one another – and, feasibly then, twins separated at birth. After he sees the picture, Brother sets out for the Grayson family home, on Winter Island off the coast of North Carolina, to find his brother and learn the truth behind his parentage.

Before Brother leaves his small-town with his faithful Australian shepherd mix, Trooper, he winds up saddled with another unexpected burden. Cole has vanished. Cole was a flashy big-talker who dreamed about winning a fortune through cards or the lottery. Presumably, Cole skipped town to seize such an opportunity. In his absence, Cole left behind his little brother, Jack. Along the way to find his twin, Brother, Jack, and Trooper meet Kit, a teenaged girl, who helps them on their trek to the Grayson home. As they journey closer to the island, Brother is mistaken for Gabriel, and the reaction is anything but pleasant–it turns out that Brother’s long-lost twin has quite a reputation.

When they reach the island, the Senator’s stepdaughter Lucy intercepts them. She hides the band of castaways in a cottage on the island and delivers them food and other supplies. Lucy insists that the three fugitives remain hidden, at least initially. She assures Brother that he must wait for the right opportunity to approach the Senator. Over time, Brother suspects that Lucy might not be as sweet as she pretends. He grows restless and ready to march into the Senator’s estate, named – amusingly enough – Eden. But Brother would be wise to remember Mem’s two life rules. Eden is unlike his small town. It is full of the most disingenuous types of people around: politicians, lawyers, and their lackeys who spin lies in any direction they want.  To get to the truth, Brother must think savvily. The truth he hopes to uncover though might be much more poisonous than he could have ever imagined.

Novelist Clay Carmichael revises the prince and the pauper tale for a modern audience and weaves in elements of a road trip story. The book is geared toward young adults, but has content that could grip readers of many ages. Carmichael is a Chapel Hill native with a degree in creative writing from UNC-Chapel Hill. She currently resides in Carrboro. For information on her first novel, Wild Things, read this post.