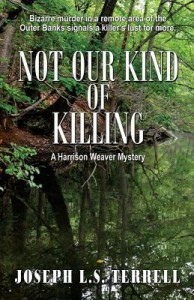 Crime writer Harrison Weaver made a frustrating trip to the North Carolina mountains in April.  A young woman had been murdered and left hogtied in her own car.  Harrison’s editor asked him to head up to the mountains to get the story but when Harrison found out that the crime was poorly investigated and the woman’s body cremated without an autopsy, there was not much he could do.  This was one crime that would remain unsolved.  Now it’s May and Harrison is thinking about other things, like his relationship with Elly Pederson. Elly is a widow who works for the county and through her Harrison has gotten to know many locals. After two years on the Outer Banks, he is starting to feel like he might fit in.

But Harrison does not fit in with everyone–not all the county deputies appreciate his style or the way he pokes his nose into police business, and District Attorney Rick Schweikert is especially antagonistic toward him.  So when Harrison finds a young woman’s body near a local kayaking spot, he has some explaining to do.  Not everyone wants to hear about how much this murder resembles the earlier murder in the mountains. But Harrison’s friend SBI agent Thomas Twiddy is open to the connection. As they investigate the local crime, Harrison remembers what the mountain people said about that murder being “not our kind of killing.”  Following this thought leads him to a pair of serial killers.

This is the third Harrison Weaver mystery. The series begins with Tide of Darkness.