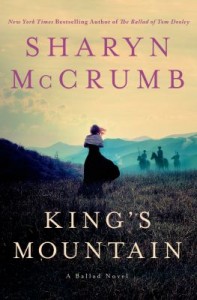 Sharyn McCrumb is a descendant of the Overmountain Men, the 18th century backcountry fighters who turned the tide of the Revolutionary War by their defeat of British forces and Tory sympathizers at King’s Mountain. One of those Overmountain Men, John Sevier, narrates much of the novel, and readers see the events leading up to the battle, the fight, and its aftermath through his eyes.

Sevier, and other historical figures such as Isaac Shelby and Col. William Campbell, come to life through McCrumb’s description and dialog.  Readers get a good sense of what motivated Sevier to settle where he did, the dangers of moving the the west side of the mountains, and why the threats from British army major Patrick Ferguson prompted Sevier, Shelby, and their kin to act.  The battle and its human cost are well portrayed, and readers will feel interest in both the historical figures who exploits they already know of and the purely fictional characters whose stories round out the narrative.