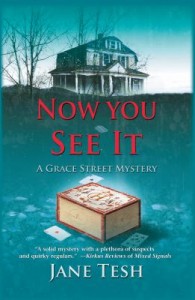 Rabbits are the animals most often associated with magicians, but Wizards of Wonder, the magicians club in Now You See It, is more of a snake pit. The Finch brothers, Lucas and Taft, are the peacemakers in the group.  They get the idea to channel their colleagues’ energies in a positive direction by having a contest. Whoever can open the special box the brothers have–a box that once belonged to the great magician Harry Houdini–can help themselves to any of the the brothers’ magic props.  But before the contest gets going, someone steal the Houdini box.

Although this is clearly a crime, the Finch brothers do not want to involve the police.  Instead they contact David Randall, a private investigator who is the main character in this and the two earlier books in the Grace Street Mystery series. David’s business is just limping along, so he is happy for the case. But when Taft Finch is murdered and one of the other magicians attacked, David knows that this is about more than a simple theft. Professional jealousy, deception, thwarted romance all swirl together.

This is the third Grace Street Mystery, and characters and issues from the early novels are present in Now You See It.  David’s romance with Kary is progressing, and David’s dreams of his dead daughter are becoming more a source of comfort than pain. David’s housemate and friend, Cameron wants to propose to his lady love, Ellin, but she has been distracted by her job on the Psychic Service Network–and her work problems cleverly figure in the plot.