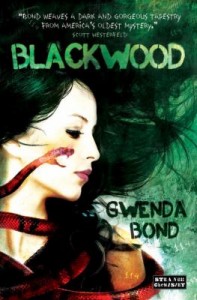 Bearing the brunt of a centuries-long family curse in a small town isn’t easy, especially if you’re a seventeen year-old girl. Miranda Blackwood has gotten used to being called a freak and being treated like something of a leper, but that doesn’t mean she likes it. The Blackwood family has lived on Roanoke Island since the times of the original Lost Colony. Locals consider Blackwoods bad luck. Miranda mostly keeps to herself. She doesn’t want to draw attention or give credit to the family folklore. She interns as a set and costume lackey at the Waterside Theater, which puts on productions of The Lost Colony for tourists visiting the island.

One ordinary night, on what seems like a routine performance, Miranda notices something strange while she watches the end of the show with the stage manager, Polly. She sees a life-sized, black ship that is careening toward the performers. Nobody, not the performers nor the audience members, notices the ship, except Miranda. She watches as the ship approaches the stage. At the last second, on impulse, Miranda leaps onto the stage to throw herself at the seven-year-old actress playing Virginia Dare. Too bad no one else present understands Miranda’s actions. What was meant as a virtuous, self-sacrifice on Miranda’s part is chalked up by the cast and crew as the typical Blackwood weirdness. After the show, the director chews out Miranda’s unprofessional actions, questioning whether or not Miranda should participate in future performances.

Miranda heads home, haunted by the embarrassment and the phantom ship. She lives outside of the picturesque part of Manteo with her father, her golden retriever named Sidekick, and her old yellow car (complete with a dashboard hula girl) that she affectionately calls Pineapple. Since her mother’s death several years prior, Miranda has taken care of her father. Over time, her father’s alcoholism has grown worse. His skin is so ruddy from drinking that his odd, snake-shaped birthmark is almost obscured. Miranda crashes on the couch so she can greet her father when he returns home intoxicated and help him into bed.

Morning comes and Miranda’s father never comes back home. Confused, and slightly concerned, Miranda goes looking for him. She finds the town huddled around the police station.  Police Chief Rawling reports that around 100 people on the island went missing overnight. People have inexplicably vanished; leaving without any sign of intentional abandonment. The official number is later finalized at 114, coincidentally the same number of people missing several hundred years ago in the Lost Colony. Shaken by the sudden mass disappearances, Rawling calls his seventeen-year old son, Phillips, home.

Phillips Rawling thought he had escaped the island for good. Once he started hearing the voices, he made trouble to force his parents to send him away. Off the island, Phillips is normal, like any other teen, but on the island, he can’t shut out the voices of spirits. The clamor of the voices is enough to make him go crazy. He isn’t interested in returning home, but his father has already made arrangements. Police Chief Rawling doesn’t believe in supernatural occurrences and other fantastical nonsense, but something in his gut tells him that Phillips might be able to help. However, Phillips has his own agenda. If he’s forced to go back to Roanoke Island, then he’s bent on finding one person first: Miranda Blackwood. She’s a primary focus of the voices’ chatter, and none of it is any good.

Blackwood is novelist Gwenda Bond’s first young adult novel, published in 2012. In the interim, Bond has published another work, The Woken Gods, and her third novel, Girl on a Wire, is set to be released in October 2014. In Blackwood, Bond weaves together historical events (portrayed with fictionalized liberties), supernatural elements, and teen romance, all doused with a healthy dash of humor. The novel includes a concise summary of the Lost Colony to prime readers with background information before Bond’s story begins.  Bond infuses the original legend of the Lost Colony with quite a bit of imagination. Blackwood is perfect for readers on the look-out for an intelligent young adult novel.