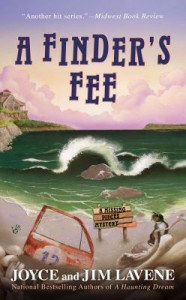 Because the Outer Banks are sparsely populated we tend to forget that they have been inhabited for a long time.  Native Americans, the ill-fated members of the Lost Colony,fishermen,  later settlers, pirates–they all lived, loved, worked, and died on these barrier islands.  In A Finder’s Fee, one of those early settlers, Maggie Madison, contacts Dae O’Donnell through an amber necklace that’s been  given to Dae.  In her own time (the 1600s), Maggie was thought to be a witch, but Maggie was just gifted, like Dae.  Maggie reaches through time to Dae, asking Dae to gather up her bones and bury them beside her great love, Thomas Graham.

Dae has other things on her mind–like running for re-election and managing her shop.  But the kinship she feels for Maggie sends her to the site of Maggie’s home to collect her bones–where she finds a buried race car and a much more recent body.  The car was once owned by Randal (“Mad Dog”) Wilson, Dae’s opponent in the Duck mayoral race.  The body is that of Lightning Joe Walsh, the man who took such pleasure in beating Mad Dog.  But Joe Walsh took pleasure anywhere he could, and as Dae looks into his murder she finds that many of her friends had ties–some sweet, some painful–to the dead man.  Dae turns to Kevin, the ex-FBI man who has won her heart and her grandfather, a lawman at the time Walsh disappeared, for help, but it is Maggie Madison who is there for Dae in her time of greatest peril.

This is the fifth novel in the Missing Pieces Mysteries series.