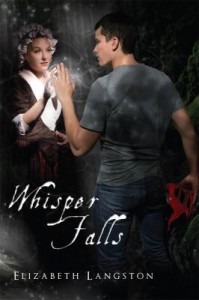 Mark Lewis is a young man dedicated to mountain bike racing. His constant training has just recently cost him his girlfriend. However, even this does not take away from his focus on training. It is while he is out training for a race that he sees a girl, Susanna Marsh, through the waters of Whisper Falls. Mark believes she is just standing on the other side of the falls until he tries to get through and the falls repel him. Even stranger is the fact that the girl doesn’t seem to know what a bike is and she claims that the year is 1796.

A few days go by without them seeing one another and the two begin to think that it must have been some illusion. Nevertheless, both are drawn back to the spot and the mystery of the falls. When next they meet, Mark has come prepared with a variety of questions. Susanna’s answers convince him that they are two hundred years apart. Continuing their meetings at Whisper Falls, Mark and Susanna soon become close friends. This is a treat for Susanna who is an indentured servant. Her master has forbidden her to have any friends. With friendship comes the intertwining of lives. Soon, Mark is so caught up in Susanna’s world that he starts missing out on training. This doesn’t bother him as much as what he finds out about what is in store for Susanna and those she loves.

Susanna’s indenture is coming to an end in a few months when she turns eighteen. Unfortunately, the cruelty of Susanna’s master, Mr. Pratt, may have arms long enough to reach to her sister Phoebe. Documents that Mark has found tell of a fate for Phoebe that is far worse than Susanna’s. Mark and Susanna set out to change Phoebe’s path. Doing so will alter the future forever, resulting in a consequence that will be unbearable for them both. Shall Phoebe be saved? Will Susanna? And will this budding romance be able to transcend a two-hundred year divide?