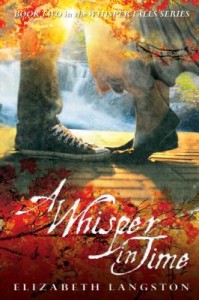 Susanna Marsh is grateful that her boyfriend, Mark Lewis, rescued her from a life of servitude, but now she must learn the ways of a world two centuries apart from her own. An indentured servant from 1796, Susanna is not prepared for this world of freedom, nor its lax expectations for young adults of her age. Without identification Susanna can neither go to school, nor can she get a job. Unused to not having anything to do, Susanna is at a loss for what to do with herself and is having to depend upon others to survive.

On the other hand, Mark has much to do in his last year of high school. He has gained some new friends, is on the homecoming court and is trying to figure out what colleges he may be interested in attending. All he wants is to share his world with the young lady he loves. But first he must come up with a way to get her an identity within this century.

To give herself something worthwhile to invest her time in, Susanna seeks out information on those she left behind by combing through historical documents. She and Mark soon come upon journal written by her sister Phoebe. When she learns what Phoebe’s future holds, she can’t help but to act even though doing so bodes ill for her own happiness. Will Mark be able to save Susanna once again or will their lives be forever altered?

A Whisper in Time is the second book in the Whisper Falls series. Susanna and Mark first met in Whisper Falls, the first book in the series, and this novel continues their tale of a magical waterfall and a love that transcends centuries.