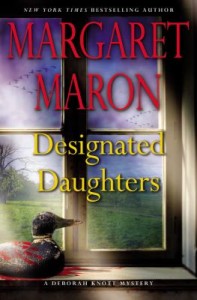 Aunt Rachel has always been an easy going, neighborly person who made friends with many of the people who came to her vegetable stand.  Although never a gossip, Aunt Rachel has been privy to a lot of secrets.  Nearing death, she begins to unburden herself of some of those stories–not in a way her family understands but clearly enough to unnerve at least one listener.  When the family steps away from her room, someone smothers this sweet woman.

The family is both horrified and puzzled.  Even though Deborah has promised Dwight that she will not interfere in the homicide investigation, this is her family.  Deborah begins to match up some of her aunt’s ramblings with the stories of neighbors and kin.  A church man who hit his wife, a house fire that killed a mother and her young daughters, a cowbird egg, a revealing bathing suit–which one of these references would incite someone to murder a woman already in hospice care?  Through Deborah’s investigations, readers learn more about the Knotts family history while Deborah identifies the killer.