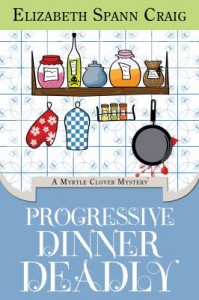 Myrtle Clover and her best friend Miles are planning a coup in the fictional town of Bradley, North Carolina. Today at book club, they’ll suggest the reading of actual literature. Myrtle even has a back-up plan, in case things aren’t looking too good for this suggestion. What Myrtle didn’t plan for is for her horrible neighbor, Erma Sherman, to chime in when the question of changing the book club is brought up.

Erma proposes a supper club, making it look like Myrtle was hinting at this suggestion. Myrtle wishes Erma would focus on the crabgrass that keeps creeping over into Myrtle’s yard and keep her proposals to herself! Nevertheless, the suggestion of a supper club is met with enthusiasm all around –even Miles is looking excited. Many in the group are even more enthusiastic for the idea of a progressive dinner, a dinner in which the group will go from house to house throughout the night, enjoying different courses at different houses. Myrtle is completely against this idea until she is complimented on her blackberry cobbler and asked to host the dessert portion of the night.

The supper club is off to a rowdy start when guests who weren’t even a part of book club show up at Miles’s house. The event soon takes a turn for the worse when Jill and her sister, Willow, get into an argument over Jill’s husband’s taste for drinking. After that, the night continues to deteriorate, from Willow’s house where the hostess isn’t there at their arrival and then rushes off, to Jill’s house where the group is greeted by a drunken Cullen, Jill’s husband. Nevertheless, that isn’t the worst of it–that comes when Myrtle finds Jill in the kitchen, lying in a puddle of blood.

Myrtle is soon using her detective skills to search out the suspects, and she isn’t against relying on charitable acts to get close to them. Just as it seems like Myrtle has solved the case and avoided danger, there is an unexpected action that sheds new light on the murder. Will Myrtle be able to outmaneuver the suspects and solve this case before she ends up being the next victim?

Progressive Dinner Deadly is the second book in the Myrtle Clover Mystery series. Originally published as an e-book, the printed version is now available. Octogenarian sleuth, Myrtle Clover got her first taste of solving crimes in Pretty is as Pretty Dies and it doesn’t look like this spry retired English teacher will be putting down her detective cane anytime soon.