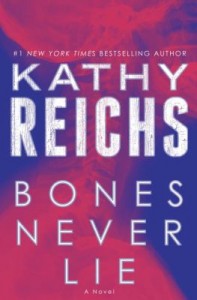 As Bones Never Lie opens, Temperance Brennan’s life is quite, if a bit lonely. She is teaching at UNC-Charlotte and her mother is fairly close by in a private psychiatric clinic in the mountains. Tempe misses her former partner Andrew Ryan, and is hurt at the way he took off to nurse his sorrow after his daughter’s death.  Tempe doesn’t know if she’d want him back, but she is forced to find him when police in Vermont and Charlotte are confronted with murders that may be linked to crimes that Tempe and Ryan investigated in Montreal over a decade ago.

Tempe is still haunted by images from a basement in Montreal where Anique Pomerleau tortured and starved several young girls.  As the police were closing in, Pomerleau torched the building and escaped. Although Pomerleau was not captured, Montreal authorities had her DNA from an earlier arrest.  Now her DNA has turned up on a corpse in Vermont and one in Charlotte.  Detective Umpie Rodas from Vermont brings this information to the Charlotte-Mecklenburg Police Force the very week that another Charlotte girl–similar in age and appearance to the dead girls–goes missing.  Both the CMPD and the State Bureau of Investigation are on the case, which will have some unexpected and unsettling twists and turns.  Longtime readers will appreciate the way that Reichs fleshes out some of the lesser characters from earlier books, especially Skinny Sliddell and Tempe’s mother, Daisy.  Readers who know Charlotte will particularly enjoy following Tempe through the city’s neighborhoods and streets.