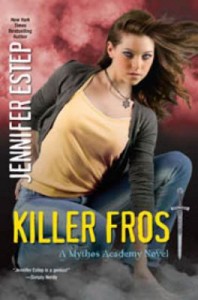 “Self-sacrifice is a very powerful thing, especially if you do it of your own free will.”

Gwen Frost is just settling down from her last battle with the Reapers, in which her boyfriend Logan was possessed and forced to turn against her. Now Logan and Gwen are out on a double date with Gwen’s best friend Daphne and her boyfriend Carson, and everything is becoming normal again. Nevertheless, there is one moment that dampens the mood – apparently other students at Mythos Academy are betting on when the Reapers will show up next and if Gwen will be able to stop them. As the goddess Nike’s chosen champion, it is Gwen’s duty to kill the god Loki and stop his Reapers from taking over the magical world. However, Gwen has not shared this bit of information with her friends.

The reoccurring bet is that the Reapers will show up at the Valentine’s Day dance, but Gwen thinks it has been too quiet and is expecting something to occur before then. She turns out to be correct. The Reapers attack while Gwen and her friends, along with the Protectorate, are transporting artifacts to Mythos Academy. When Gwen foils their plans, Vivian, the champion of Loki, and her mentor Agrona strike back at Gwen – and they make things personal.

Gwen is forced to make a hard decision – to lose yet another person she loves or to risk the lives of everyone in the magical world by giving Loki an artifact that could bring him back to full strength. If you’ve been following the series and know Gwen, it’s not hard to guess what path she chooses. With Gwen’s choice, the final battle between Gwen and Loki begins. Gwen’s destiny is to kill Loki, but she can’t envision how to do so without losing herself. Before this tale ends, Gwen will have another difficult choice to make–she must choose her fate.

Killer Frost is the sixth and final installment in the Mythos Academy series. Estep continues to make her characters relatable – what teenager could sentence a loved one to death for the good of all? These supernatural characters are still everyday teenagers, and this is just one of the appeals of this series. In this sixth novel, readers will learn what exactly is needed to defeat an evil such as Loki.

Young adult readers ages 13 and up will enjoy this mythological urban fantasy series.

Are you new to the series? Then check out our post on the first novel in the Mythos Academy series, Touch of Frost. Or, check out this title’s availability in the UNC-Chapel Hill Library catalog.