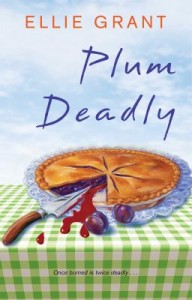 Imagine being accused of theft by your employer and being escorted from your office that very day. And having all your accounts frozen. And having a guard stationed at your apartment to keep you from selling any valuable possessions. All this happens to Maggie Grady, the main character in Plum Deadly, the first book in a new series of cozy mysteries set in Durham, North Carolina.

With not much more than the clothes on her back, Maggie leaves the Big Apple and heads to Durham where her Aunt Clara welcomes her with open arms. Aunt Clara and Uncle Fred raised Maggie after her parents died in a car crash, but once Maggie left for New York, she didn’t keep in touch with her aunt and uncle. Maggie’s guilt about this is almost crushing, but Aunt Clara doesn’t acknowledge the slight. Since Uncle Fred died, Clara has been struggling to keep her bake shop open. Maggie’s reappearance is a pure blessing to Clara. In no time at all, Maggie has brought order to Clara’s accounts and cleaned up both the shop and Clara’s house.

Maggie is just about ready to take on the developer who wants to buy Aunt Clara’s building when trouble strikes. Her former boss, Lou, appears at the pie shop to tell Maggie that he knows that she is innocent and who actually stole the $3,000, 000. But hours after Lou makes this startling announcement, his body is found in the alley behind the pie shop. He’s been poisoned. Now Maggie looks to be not just a thief, but a murderer too. Rather than helping Aunt Clara with the business,  Maggie’s presence is hurting it. But that just provides added motivation for Maggie to clear her name. Will this crisis bring the two women closer together–and will the pie shop survive? Readers who try the recipes at the end of the book will no doubt be rooting for Maggie and Clara to prevail.