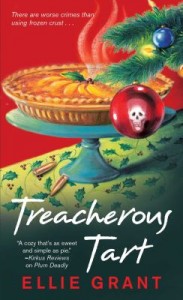 Maggie Grady has been enjoying seeing her Aunt Clara celebrate the wonders of Christmastime in Durham, North Carolina with her new love, Donald Wickerson. So it is no wonder that Maggie’s Christmas mood is completely ruined when her boyfriend, Durham Weekly newspaper reporter Ryan Summerour, presents Maggie with evidence that Donald is not what he seems. Instead of being the caring and trustworthy man that he presents himself to be, Donald is a male black widow. Donald has had six wives in the past and all of them suffered suspicious deaths. He has been investigated for every death, but has escaped charges. However, the evidence against him is condemning.

Faced with breaking her Aunt Clara’s heart, Maggie just doesn’t know what to do. When Maggie finally gets up the courage to tell Aunt Clara, she won’t hear any of it. Her wonderful Donald could never do such a thing. Wouldn’t Maggie be upset if Aunt Clara suggested Ryan was capable of hurting someone? The news spreads when Ryan puts a picture in the paper with his article on Donald’s philandering ways. It looks like someone must have believed it because that same day Donald stumbles into Maggie and Clara’s shop, Pie in the Sky, bleeding from a bullet wound.

Now, as the girlfriend of the victim, Aunt Clara is under suspicion for Donald’s death. Maggie isn’t going to let her aunt end up in jail over a murderous scoundrel, so she and Ryan start digging for more information on Donald and for possible suspects. They soon find out that there are a lot of people who could have wanted Donald dead seeing as he was dating more than Aunt Clara at the time of his death, not to mention the family of Donald’s supposed victims. Just when it looks like Ryan and Maggie are onto something, another crime is carried out. Will Maggie be able to find the murderer before anyone else gets hurt? Also, Donald wasn’t the only person in town with something to hide. Will the secrets uncovered shed light on the crimes committed or will they only add to the confusion?

Treacherous Tart is the second book in the Pie in the Sky mysteries.