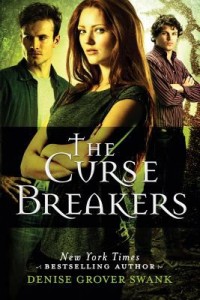 Ellie Lancaster has been confronted with the horrible reality of the curse that she spent her whole life denying. At twenty-three, Ellie has always lived in the small town of Manteo, on Roanoke Island. Like many young people she oftentimes felt out of place, like she would never fit in, and she would never find her purpose. That is until she met Collin Dailey and realized the four hundred year old curse that her father kept muttering about is real, and she and Collin are the two Curse Keepers.

Meeting Collin was fate and their loved seemed like fate too, a bond that couldn’t be broken, but then Collin betrayed Ellie. Instead of fighting alongside Ellie to maintain the curse and the keep the spirits locked away so that the world would remain safe, Collin tricked Ellie into breaking the curse. Now all the spirits have been released and they want Ellie’s soul. Even worse, Ellie’s father sacrificed himself to close the gate to the underworld, so Ellie is left on her own to figure out how to save herself and the rest of the world. Her first step in doing so is to find the mark of Ahone so that she can permanently tattoo it upon herself. This will protect her soul from being taken by the malevolent spirits, but will it protect her from death at their hands? And why won’t Ahone reveal his mark to her?

Not only is Ellie facing malevolent spirts, but she is also being hunted by men that she and Collin sold some items to. Thanks to Collin, they believe that Ellie knows something about a stolen artifacts shipment and will stop at nothing to get the information out of her.

The one good thing going for Ellie right now is the fact that she might have found someone who can help her. She tracked down a Native American Studies professor at UNC-Chapel Hill, Dr. David Preston, and has convinced him to help her. Then again, the last time she thought a guy was helping her, he was actually using her. Can she trust David or will he turn on her just as Collin did? When Ellie finds herself attracted to David, she must make the choice to take a chance on him or to push him out of her life. Will she be able to take that chance when her soul is entwined with Collin’s? Whether she does or not, there is still evil to be fought and Ellie must prepare to face her destiny.

In this second novel in the Curse Keeper series, Ellie is getting ready to fight the battle of a lifetime while struggling with her own internal wars. If you’re new to the series check out our blog post on the first novel The Curse Keepers.