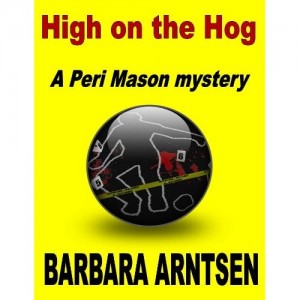 Reporter Periwinkle “Peri” Mason is looking forward to a relaxing Carolina fall. Earlier in the year she narrowly avoided becoming a victim while unexpectedly solving a slew of murders on Myrtle Beach, and in her opinion, once was enough. Unfortunately, the universe has other plans for the tough journalist from fictional Lofton, North Carolina.

While walking along the Neuse River in Wayne County near Lofton, Peri’s spirited Jack Russell terrier discovers something truly grisly– a body floating in the shallows. The corpse is that of Curtis Ganner, who was missing for several days. Mysteriously, his truck was found miles upriver, making murder the likely cause of his demise. Curtis worked for the McKeel Processing Plant, which is one of the largest pork producers in eastern North Carolina. The plant’s human fatality rate begins to rise when another missing employee is also found murdered. When a third victim’s head is found among some porcine remains, Peri can’t help herself– she starts investigating.

As she digs into the soft underbelly of the pork industry the intrepid reporter finds not only murder, but industrial espionage. Soon she is knee-deep in pig excrement (literally and figuratively), and more in danger than ever. Will Peri make it out alive this time?

Comments Off on Barbara Arntsen. High on the Hog: A Peri Mason Mystery. United States: CreateSpace, 2012.