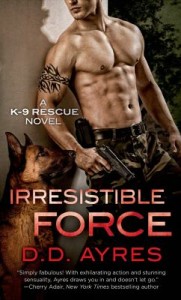 Officer James Cannon is on a mission to find his missing partner. Bogart, James’s partner, was kidnapped a month ago, and James has a lead on his location. Even knowing that going out on his own could land him in trouble, James can’t help but confront the kidnapper when he sees Bogart come running out of a cabin in Lake Gaston, North Carolina.

Shay Appleton is a wounded woman. Dealing with an abusive ex who just doesn’t know how to let go has taken its toll on Shay. However, her adoption of a stray dog, Prince, and escape to a cabin at Lake Gaston have brightened her life – the fact that Prince will make a great watch dog is just an added bonus. This bright spot is threatened when Officer James Cannon, of the Charlotte-Mecklenburg Police Department, shows up claiming that Prince’s real name is Bogart and that he is a trained police K-9. Faced with this threat, that is more painful than the thought of her ever-present ex, Shay has no idea what to do.

Shay’s reaction to losing Bogart touches James for some reason he can’t explain. When he realizes that Shay’s tale of Bogart being abandoned at a shelter is true, James decides to bring Bogart back for one night so that Shay can have time to say goodbye. James and Bogart walk into a scene that convinces James that Shay needs more than a guard dog. Shay’s abusive ex has found her and has shown himself willing and able to follow through with his threats.

As James and Shay’s lives intertwine, it becomes clear that Shay has more to fear than just her ex. Also, James may have to confront his own personal fears when it begins to look like Shay has stolen more than just Bogart’s affection – she may just have stolen James’s heart as well. When sealed records from Shay’s past are unveiled, will Shay trust James with her story? Is James willing to risk his reputation within the police force to protect Shay?

Irresistible Force is the first novel in a series about lawmen, their loyal K-9 partners, and the women they both fall for.