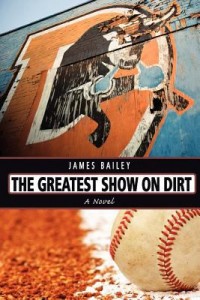 The main character in this novel, Lane Hamilton, is a twenty-something escapee from corporate banking.  A high school buddy, Rich, gets Lane a job with the Durham Bulls.  Rich is a bit of a bad boy, and while he shows Lane the ins-and-outs of his new job, he also clues in Lane about the fun to be had at the ballpark.  Readers are introduced to the world of minor league baseball: the stat sheets that are prepared for reporters who cover games, the difficult job of removing the tarp that protects the infield, grooming the pitcher’s mound, who hangs out with whom after the games.  A series of clubhouse thefts add an element of mystery to the novel, but the focus is on Lane–how he balances fun with work, extricates himself from one romance and finds another, learns to work with a variety of people, and figures out what success means for him.  James Bailey has written a book that is rich with insider information on the day-to-day operations of minor league baseball and the quirks and concerns of players and other ballpark employees. Readers who attended games at the Durham Athletic Park, or who lived in Durham before 2000, will particularly enjoy the details and local color that enrich this book.