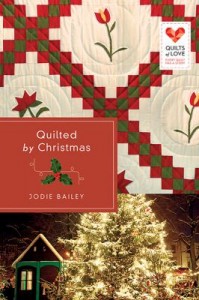 It has been twelve years. Twelve years since that fateful night when Taryn McKenna pushed Justin Callahan, her high school sweetheart, to take the next step in their relationship. Taryn hasn’t seen him since. Reeling from the breakup and guarding a secret that must never come to light, Taryn went off to school, but soon found herself back home and is now a teacher in fictional Hollings, North Carolina.

Not too long before Christmas, Taryn finds her calm and quiet existence disrupted by Justin’s return from the army. But, he’s not back for a short visit; Justin has retired and come home to Hollings for good. Now, Justin’s words, “You’re needy. Manipulative. You used me,” are ringing in Taryn’s head once again. Moreover, not only does she have to face him in town, but Taryn’s Grandma Jemma has hired Justin to do some work around Jemma’s house. What is Taryn to do when her only haven has been invaded by a man she has done everything to forget?

When Grandma Jemma is rushed to the hospital, Taryn must admit that it isn’t feeling a lot like Christmas, though this new event does show Taryn exactly the kind of man that Justin has grown into. Before her stint in the hospital, Grandma Jemma was working on a hand-stitched quilt as a wedding present for Taryn’s cousin. It is a tradition for a hand-stitched quilt containing an Irish chain to be made for every new McKenna bride. With Jemma in the hospital, it is Taryn’s duty to finish the quilt. Nevertheless, fate must be working against the McKenna’s because there is no way that Taryn will finish this quilt on her own. When Justin offers to commit his quilting skills to the cause, will Taryn be able to set her feelings aside? Even more importantly, will Taryn recognize the opportunities for healing that God is placing in front of her?

Quilted by Christmas is the twenty-second title in the Quilts of Love series. This series is made up of a multitude of books written by various authors to share their stories of “love and loss, hope and faith, tradition and new beginnings.” This is much like how a quilt is made up of many tiny stiches that are assembled together to tell a story.