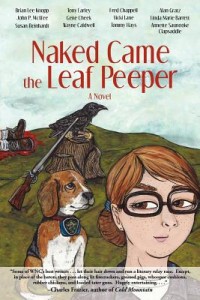 The Blue Ridge Parkway, “America’s Favorite Drive,” celebrates its 75th anniversary this year. The National Parkway was established as a New Deal program to create jobs and to promote tourism in a region that was foreign to many Americans. Today, the picturesque landscape and enlightening roadside markers provide visitors with a glimpse of the beauty and culture of Appalachia.

Although the picture of the Parkway is pleasing today, its design and formation created tension and pain in the mountain communities it winds through. As Wayne Caldwell shows in Requiem by Fire,  families were stripped of their homes, livelihoods, and even relationships with one another.

When the North Carolina Park Commission comes to Cataloochee to discuss buyouts, community members learn they have two unhappy options. They can sell their farms now at a loss and leave, or sell at an even greater loss but continue to lease the land from the government. With regulations such as what natural resources they can harvest and even what burial techniques they can use, many people feel compelled to leave and try to start anew. However, other families decide to stay at they only homes they have ever known. This is difficult, though, because their villages shrink and social networks dwindle. No matter the choice made by the natives of Cataloochee in the late 1920s, “home” is forever changed.  Highlighting the strong connection to place felt by the people affected by the Blue Ridge Parkway, Caldwell provides a different view of the beloved roadway.