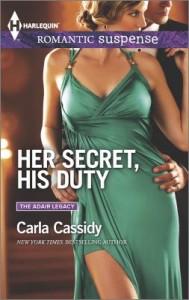 That can’t be! Debra Prentice can’t be pregnant, but thinking back six weeks ago to that passionate one night stand proves that she can. Debra has no intentions of giving her baby up; she’ll just have to keep the baby’s father a secret forever. Because, even though Debra has had a crush on the man for years, she knows that she isn’t right for him – that she isn’t the kind of woman that a man of his standing needs beside him. As the product of an affair between a married man and a drunk, Debra’s background is not one that could boost Trey Winston up the political ladder that he is seeking to climb in Raleigh, North Carolina. Not to mention that he is her boss’s son.

Trey Winston has just announced to his family that he is planning on running for United States Senate. Everyone knows he has it in him, as he is the product of a political family. Trey’s father was a politician up until the day he died, and his mother still is one. Kate Winston, Trey’s mother, has served as an ambassador to France and was also the first female vice president. With a legacy like that, Trey can win this race. Of course, he would appeal to voters more if he was married. Trey has the perfect candidate in mind to be his wife, Cecily McKenna. Cecily comes from old money and has everything it takes to be the perfect politician’s wife – including the ability to set aside her emotions. Everyone expects that Trey will propose to Cecily very soon in order to cement his candidacy. The only problem is that Trey can’t get his mind off of Debra. Trey hasn’t even touched Cecily since the night with Debra that is forever burned into his mind.

When Kate Winston, Debra’s boss, asks Debra to help Trey with his announcement gala, the two will have to spend a lot of time together. Seeing how much Trey is invested in running for the Senate, Debra’s determination to keep the father of her baby a secret only grows. However, the more time Trey spends with Debra, the more he realizes that he can’t marry Cecily because he is in love with Debra. After attacks on Debra’s life, Trey resolves to keep her safe–but is he only putting her in more danger?

Her Secret, His Duty is the first novel in The Adair Legacy series. This series is the tale of a family steeped in politics, and how love can help to heal all wounds.

Comments Off on Carla Cassidy. Her Secret, His Duty. Don Mills, Ontario: Harlequin, 2014.