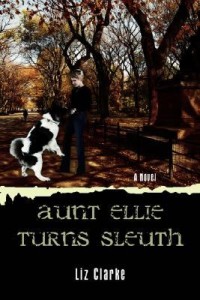 Eleanor Lee’s life has settled into a pleasant groove.  Although the niece who she raised has left for Wyoming, Ellie still has family and friends in North Carolina.  Ellie and her partner Kathryn have bought a nice house in Charlotte. To complete the household Ellie has gotten a big dog, the appropriately named Mutt.

As this novel opens, Mutt and Ellie are on their morning walk in a Charlotte park when Mutt pulls Ellie off the path after he picks up the scent of a dead body.  In short order the police arrive and determine that the man had been stabbed to death.  A nice young police officer, Chris Marchand, takes Ellie’s statement and sees to it that she and Mutt get home safely.   Although Ellie is shaken by the discovery of the body, she is curious too.  Despite advice from family and friends to leave the investigation to the police, Ellie starts making her own inquiries.   She has a good network to tap: a local judge who walks his dog in the same park, Kathryn’s psychiatrist brother who treated the dead man’s wife, and that nice police officer–who has been dating Kathryn’s niece.  As this leisurely cozy mystery unfolds, readers learn more about Ellie’s past, and the surprising way it connects to the case.

The UNC-Chapel Hill Library also has the prequel to this novel, She Sold Sea Shells, in which Aunt Eleanor’s niece, Shell Lee (Shelly) McGivern, learns what happened to the mother who abandoned her.  Although Shelly is a small town police officer in North Carolina, the action of the novel takes places in Wyoming.