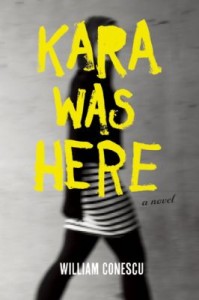 Life after college doesn’t always go exactly as planned. Brad Mitchell had rainbow-hued hair and hoped to find serious employment as an actor. He was cast in a few area productions and commercials, but nothing that amounted to a real paycheck. So his part-time gig as a realtor went full-time. His wife’s pregnancy and recent vision problems make Brad feel well into his mid-thirties. Margot Cominsky has shed her racy image as “Cougar Cominsky,” seductress of the football team. Instead, she’s packed on some extra weight, probably a result of her booming muffin business. Her love life is unsteady and her current long-distance relationship is steering through choppy waters. Kara Tinsley, Brad’s college girlfriend and Margot’s college friend, moved to New York City to chase after her dreams of becoming an actress. She abandoned Brad back in North Carolina without much of a second look back. Unfortunately, Kara never managed to make a name for herself on Broadway. And now she’s dead.

Kara’s old college friends and family have gathered to mourn her sudden death. Reportedly, Kara died of an overdose. Not a complete shock since to the very end,  she refused to sacrifice her wild nature. Her friends remember Kara’s untamable, spitfire personality and irreverent sense of humor. At the funeral, Brad and Margot are surprised to see each other so different from their college years. They’re even more surprised to meet Steve, Kara’s secret fiancé. Steve (or “Mullet” as Kara called him) was Kara’s last roommate. Margot recalls that Kara didn’t have a single nice word for Mullet the entire time they lived together. So she doubts that Mullet, a hulky, forty-seven year-old loser, and Kara were ever in a serious relationship.

Brad reaches out to Kara’s younger sister, Gwen, who is eighteen and on the cusp of college, freedom, and young adulthood. He offers her a number to call for a little extra support or advice. Gwen ventures to New York for a special summer arts program. She had planned to spend the summer bonding with Kara. Despite Kara’s absence, Gwen decides to attend. During Kara’s funeral though, things turn slightly strange.  Both Brad and Gwen see an apparition of Kara, who lectures them and teases them with her usual spunk. Just as Gwen enters Kara’s old haunts and associates with her sister’s former paramours, Margot drags Brad into her suspicions that Kara was murdered.

A University of North Carolina-Chapel Hill and NC State graduate, William Conescu, writes a psychological portrait of three college friends and their relatives and significant others. Brad’s double vision seems to represent the central aspect of the novel: aging and its effects on identity. Conescu’s characters, Brad and Margot in particular, are split in their identities, stuck between their former teenage and twenty-something self and the passage into their new thirty-something self. Gwen endures a similar entrance into young adulthood. Kara’s death brings Brad and Margot, and even Gwen, into a state of unnerving self-evaluation. But they soon realize that not only was Kara not exactly the person they thought her to be, neither are they.