Jacqueline DeGroot. The Secret of the Kindred Spirit. Bloomington, IN: 1st Books Library, 2002. 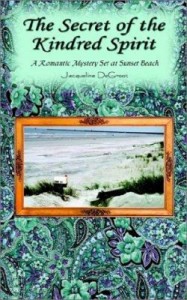 Development is always a contentious issue on the barrier islands along the North Carolina coast.  Be it beach nourishment, road improvements, or an ocean-front mansion, locals perceive that there will be winners and losers.  As this novel opens, Cassie Andrews has arrived on Sunset Beach Island to begin a controversial, long overdue replacement for the bridge linking the island with the mainland of Brunswick County.  As she surveys the old bridge close up in her kayak, she is horrified to discover a man’s head bobbing up against a pylon.  Soon the police are on the scene, and when the man is identified as one of the chief opponents of the new bridge, Cassie knows that this assignment will be more challenging than previous ones.

Part of the challenge for Cassie will be to keep her mind on her work.  Michael Troy, one of the police officers on the murder case, is instantly attracted to Cassie, an attraction that grows when he follows her to nude bathing section of Bird Island.  Much of the novel is devoted to verbal–and other–interplay between Cassie and Michael.  Interwoven with that is the story of the victim, Damn Duke Ellington, a seemingly destitute island native who was known chiefly for his opposition to the new bridge and his support of the island’s feral cat population.

The break in the case comes from a message in a notebook left in the Kindred Spirit mailbox on Bird Island.  Micheal’s good detective work with the notebook leads him to the murderer, and not a minute to soon.  The Kindred Spirit mailbox is a real part of the Sunset Beach story, and it figures in at least one other novel on this blog, Marybeth Whalen’s The Mailbox.  Readers who like softer, more meditative romances, should read The Mailbox.  Readers who prefer a fast-paced, more graphic story will enjoy The Secret of the Kindred Spirit.

Comments Off on Jacqueline DeGroot. The Secret of the Kindred Spirit. Bloomington, IN: 1st Books Library, 2002.