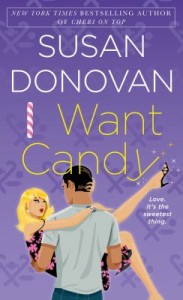 Set just after the events of Cheri on Top, I Want Candy follows the misadventures of Cheri’s best friend Candace “Candy” Carmichael. Like Cheri, Candy was a high roller in Tampa’s real estate scene. When the market crashed and the girls lost everything, Cheri was the first to come crawling back to their childhood home of Bigler in the mountains of western North Carolina. Cheri’s return home went better than well– she’s happily engaged to her childhood sweetheart, and editor of the local newspaper, the Bigler Bugle.

Broke and crashing on the couch in her mother’s apartment at fancy retirement home, Candy can’t imagine what Bigler could offer. The answer comes in the form of the dashing Turner Halliday, Cataloochee County Sheriff and Candy’s former high school classmate. Turner has been in love with Candy ever since the seventh grade, but she seemed to see him as nothing more than a friend. Candy’s racist father, one of Bigler’s good ole boys, quickly put an end to any ideas the biracial Turner might have had about dating his blonde, blue-eyed daughter, too. But Jonesy Carmichael has been dead for years, and Candy is back in Bigler. When their first encounter leads to a steamy kiss, Turner begins to hope Candy might see him differently. Unfortunately, he doesn’t have as much time to think about Candy as he would like– Cataloochee County is becoming central to the production of illegal methamphetamine in North Carolina, and Turner is working overtime to bust the dealers. Additionally, Candy insists that she’s only staying in town long enough to regain her bearings before heading out to make more millions. Can Turner convince her that Bigler is more than just her past?

Cherise “Cheri” Newberry returns to her hometown just as Barbara Jean Smoot’s Impala is pulled from Paw Paw Lake. Cheri is back in Bigler, North Carolina after a wildly successful stint as a realtor in Tampa. Her beloved grandfather has asked her to come home to take over the family newspaper, the Bigler Bugle,  but Cheri expects to stay in the mountain community only for a month or two. Too much baggage remains in Bigler: her memories of being an ambitious, resourceful woman in a place that stifled her as she was growing up; fears that her parents’ death was her fault; and the still painful sting of losing her first true love, J.J. (now the Bugle‘s dashing editor). She just wants to get the paper running smoothly, and the discovery of the car owned by Smoot, a young woman who went missing in the 1950s, is sure to sell papers and make her return to Florida quicker.

As Cheri begins to sift through the Bugle‘s financial paperwork, she discovers something far worse than low readership. Thousands of dollars have been taken from the company, and that illegal deed is connected to Smoot’s murder. Fortunately for Cheri, she has reconciled with J.J., and their growing relationship gives her strength to confront the truth–and expose some of her own skeletons.