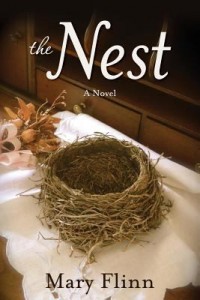 A nest, yes, but whose nest?

With retirement on the horizon, her daughters out of the house, and her husband traveling for business, Cherie Johnson was looking forward to enjoying the freedom and peace of being an empty-nester.  But all that changes in a single week when her older daughter, Hope, moves home after her boyfriend announces that he is moving to Italy without her.  Hope has studied to be an art teacher, but in the down economy, she can’t get a teaching job.  She gets by–barely–by working in a high-end dress shop and bartending.  Cherie has adjusted to Hope’s situation, but she is unprepared when her husband, Dave, becomes another casualty of the economy.  After twelve years as a sales representative, a corporate restructuring leaves Dave without a job.  Dave could go to his mother, who heads a furniture manufacturing company, but neither he nor Cherie want to do that.  Instead, Dave sends out resumes, checks employment websites, and handles the household chores–including training the little Papillon puppy that Hope brought home with her.  Dave juggles this all pretty well for the first month or two, until his fruitless job search takes its toll on his spirits.

At least Cherie and Dave’s daughter Wesley is doing well.  She is about to finish her nursing degree at UNC-Chapel Hill, and she has just become engaged to a nice fellow who has a good job with Apple.  But with the cost of a wedding now on the horizon, Cherie realizes that she must put off retirement.  At least she has coworkers who lift her spirits and gently offer advice–and so does Hope.  In chapters that alternate between Cherie and Hope’s perspective, readers learn how each woman thinks and grows, and how the family rights itself.  As in Mary Flinn’s other books, The Nest includes a network of family and friends populated by well drawn characters.  Readers will be both exasperated and charmed by Dave’s mother, Toots, and it’s a testament to Flinn’s generosity that even Hope’s self-absorbed boyfriend Liam is not wholly dislikable. 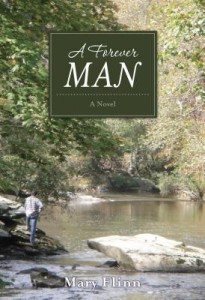 Readers met Chelsea Davenport and Kyle Davis as teenagers in Mary Flinn’s first book, The One.  The young couple married in Three Gifts and they are well settled in their marriage and their careers as A Forever Man opens.  As readers of the previous books know, Chelsea and Kyle are surrounded by family and friends, and the pair and those in their circle have faced a number of challenges and disappointments.

When the interior design expert in Kyle’s building company retires, Kyle and his partner Frank are delighted to hire Elise Masters, a talented twenty-something who was recently let go by a large Charlotte firm.  Since Kyle’s firm is so small, he and Elise often work together–meeting clients, assessing sites, and working nearby each other in the office.  Elise has a past that she is not eager to talk about, and a child who has special needs.  Kyle feels protective of Elise and her daughter, Lydia, but he feels something more too. Kyle’s feeling may be hidden, but friends and business associates can see that Elise is smitten with Kyle–Kyle is the “forever man” that Elise has been looking for.

Chelsea can sense that this new colleague poses a temptation for Kyle, and the situation is complicated by friends’ gossip, family crises, and the revelation that Lydia’s father is nearby.  Seeing how Kyle and Chelsea navigate this difficult situation will remind readers that “happily ever after”  is really “happy if we continue to work at it”–growing together, drawing strength from what has been, and keeping that passionate spark alive.

Kyle Davis and Chelsea Davenport, introduced to readers in Flinn’s novel The One, marry in the first chapter of Three Gifts.  Their future together looks bright. Kyle and Chelsea have weathered the problems of their high school years, they are doing work they enjoy, they are near Chelsea’s loving parents, and they truly love each other.  But happily-ever-after is illusive for most couples, and Kyle and Chelsea are no exceptions to this hard truth.

Soon after Kyle and Chelsea return from their honeymoon, Kyle’s architectural firm is contacted by two women from Florida who want to build a condo development just up the road from Kyle and Chelsea’s cabin.  A boozy dinner with these potential clients unnerves Kyle and arouses Chelsea’s jealousy.  Kyle fears that one of the women was more than just a client to his late father, a disgraced builder.  Neither Kyle nor his mother have come to terms with Kyle’s father’s death, and Kyle fears what he could learn from this woman.  Chelsea senses Kyle’s uneasiness, but she misidentifies its source.  A car accident, estrangement from a close friend, illnesses, and the death of a pet are additional challenges that the young couple faces, but as in Flinn’s other books, the main characters, aided by family and friends, find their path to a happy future. Flinn does a good job mixing ordinary newlywed challenges with extraordinary circumstances, and her gift for dialogue and the likableness of her characters makes this an enjoyable read.

The title removes any suspense that this novel might have had, but Second Time’s a Charm is nonetheless an engaging, enjoyable read.  Stacie Edmonds was burned by her first husband, Rick, a good-looking runaround with a cocaine habit.  Stacie came out of that marriage with her restaurant, the Sound Side, but also with a fear of betrayal and a disinclination to trust her heart to another man.  Tyson Garrett, the chef at the Sound Side, loves Stacie and wants her to see that he is not like Rick.  The novel follows the development of their relationship through a series of challenges–a vengeful former employee, a hurricane, a fragile pregnancy, and a meltdown by Rick, who still lives nearby.  A large cast of characters populate the novel–friends, family members, local characters, and staff from the Sound Side.  The Sound Side itself is almost a character; readers will get a sense of the varied work and the camaraderie  that make a restaurant successful. 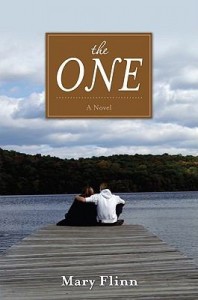 In middle school Kyle Davis seemed to have it all–good looks, smarts, athletic ability, and a wealthy, close-knit family–but appearances can be deceiving. After his sister dies and his father commits suicide, Kyle’s mom sends him off to prep school, but after just one year he returns to his hometown of Snowy Ridge, North Carolina.  There he finds that there is one constant in his life–his friend Chelsea Davenport.

Chelsea and Kyle’s fathers were once business partners, and the two teenagers have know each other since grade school.  The One follows Chelsea and Kyle through their last year of high school, a year with typical teen turmoil over dating, balancing school with other activities, and college admissions.  Chelsea and Kyle have some additional problems: a girl who is obsessed with Kyle and who seems willing to do anything to keep Kyle and Chelsea from getting close; Kyle’ s role in the death of a football player; Mrs. Davis’s  heavy drinking; and the physical decline of Chelsea’s beloved grandmother. Using dialog that is believable and vivid, the author brings these two teenagers and their difficulties alive in a coming-of-age novel that will appeal to teens and adults.