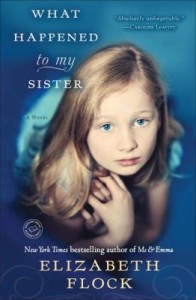 Carrie Parker, age nine, and her mother Libby are leaving Hendersonville, North Carolina. Before they drive away, Libby makes her daughter promise never to talk about anything that happened there, and to remember that her sister, Emma, was just an imaginary friend she made up. But Carrie knows better– Emma was real, until something bad happened.

After moving down into the foothills, Carrie and her mother eke out a miserable existence at a motel in the fictional Hartsville, where Libby is often too intoxicated or too busy with her boyfriends to even feed her daughter. The little girl lives on paper and stolen food, until entirely by accident, she meets the Chaplin family. Ruth, Honor, and Cricket Chaplin are three generations living under the same roof. Living in a comfortable house filled with memorabilia dedicated to their famous relative, Charlie, the Chaplin women nevertheless have their own struggles. Cricket’s sister, Caroline, passed away only a short while ago from cancer, and it has torn her parents apart. Honor, Cricket’s mother, thinks that she’s hallucinating that day in the Wendy’s when she sees the little girl stealing from the salad bar– she’s the spitting image of her Caroline. When she discover’s Carrie’s name, she knows that she has to keep this unloved, sad little girl in her life. This conviction will change her and her family’s life, and will help Carrie discover what actually happened to the sister she’s sure she didn’t imagine.

A simultaneously heartbreaking and uplifting story about family, blood ties, and what’s most important in life, Elizabeth Flock has written a beautiful story that gets at the heart of child abuse. Told from the dual perspectives of Honor Chaplin and Carrie Parker, it is an intricately woven tale that both surprises and satisfies.

Comments Off on Elizabeth Flock. What Happened to My Sister. New York: Ballentine Books, 2012.

Carrie Parker, the eight-year-old narrator of this novel, does not have an easy life. She and her sister Emma live in a poor family in Toast, N.C. Their father has recently passed away and their new stepfather is abusive to both girls, becoming especially violent when drunk. Carrie’s mother sees the problems, but can’t afford to leave, and the girls are left with seemingly nowhere else to turn.