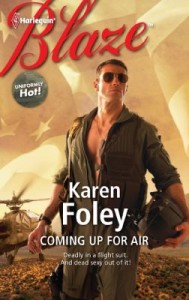 Army captain Jenna Larson is an ace Black Hawk helicopter pilot on her way from Fort Drum in New York to Kabul Airbase in Afghanistan. Stuck at Fort Bragg in North Carolina for three days before heading out, Jenna finds herself running into the same handsome serviceman over and over. Her nosy Warrant Officer and best friend, Laura Costanza, ID’s him– he’s Chase Rawlins, a soon-to-be-deployed, serious-minded special ops officer. When Jenna next sees him at a local bar, he seems just as attracted to her as she is to him. One thing leads to another. Jenna files the memorable encounter away in her head for later, when she’s running dangerous missions in Afghanistan. She never thinks she’ll see Chase Rawlins again.

In fact, she’d be surprised to learn that she has never met Chase Rawlins to begin with. Her tryst was not with him, but with his identical twin brother Chance– a hot-headed, devilish Apache helicopter pilot. When Jenna’s path crosses that of the real Chase in Afghanistan, she’s surprised and disappointed but stoic about his blank response to her presence…until she runs into Chance the same day. Chance hasn’t been able to stop thinking about Jenna, and when he finally sets her case of mistaken identity to rights, she isn’t pleased. Jenna has rules about sleeping with other pilots. Will Chance get a second chance with Jenna? And is their budding romance able to withstand both Afghanistan and the United States Army’s strict regulations?

Comments Off on Karen Foley. Coming Up for Air. Toronto: Harlequin, 2012.