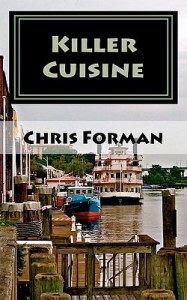 Ian Porthos Wallace feels lucky to live in the lovely (fictional) town of Port City on the coast of North Carolina. There, he makes his living as a local food critic and photographer, and indulges in his love for wearing the kilts of his Scottish ancestors whenever he can. He most definitely isn’t a detective, but because he tries his hand now and then at writing mystery novels, his friend Demos Spyros begs him to help solve a case. Their mutual friend Nick has been falsely accused of murdering his boss, chef Mitchell Reede, and Demos is convinced that Ian can prove Nick innocent. Ian isn’t so sure–he’s no professional gumshoe–but eventually he agrees to give it his best shot. It helps that Demos’s attractive sister, and Ian’s off-again-on-again girlfriend, Athena, owns a store near the crime scene. Athena, traumatized years ago by an abusive husband, has been more than a little distant up until now, but lately Ian is convinced that she’s making a real effort to open up to him.  The sensitive food-critic-turned-investigator does what he can to encourage her feelings, but he is distracted by the murder, which only gets more mysterious as the evidence piles up. Worst of all, it’s starting to look as though Athena’s no-good, abusive ex is back in town, and possibly involved with the crime. As the situation heats up, it’s all Ian can do to keep Athena safe and solve the mystery at the same time. 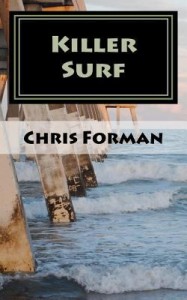 Ian Porthos Wallace is a simple man. He enjoys wearing the kilts of his Scottish ancestry, working as a food writer and photographer, and making his lovely fiancée, Athena Spyros, happy. What Ian doesn’t enjoy is murder, but it falls into his path anyway. Literally. He trips over Brenda Dexter’s body while walking on Wrightsville Beach, a stone’s throw from his home on the North Carolina coast. Ian used to know Brenda as the neighbor lady who locked herself out of the house every so often, but now he’ll be forced to remember her as a dead body.

Murder isn’t the only thing on Ian’s plate. He’s also planning a wedding with (or perhaps in spite of) his intended’s mother, Maria. Since Athena’s last marriage was an absolute disaster, Maria is determined that everything will be perfect for her baby this time around. When Ian gets the bright idea of holding the wedding in Scotland in his family’s ancestral town, Maria is dead set against it. But even with unrest on the home front and a wedding looming in the near future, Ian can’t stop thinking about Brenda Dexter’s murder, which remains a mystery. So he does a little sleuthing of his own, starting with his eccentric neighbors.

First, he talks to Ruby, who lived in the other side of Brenda’s duplex. Ruby is a great gal; she’s a stripper past her prime and her fashion sense favors animal print and pink fluff. But she doesn’t know anything. Next, he gets to know April and May, two eighty-year-old sisters with a passion for the home shopping network, who are similarly clueless about Brenda’s death. Other neighbors and various local characters come and go, but no one knows anything. Then, another murder occurs and someone steps forward with an unexpected confession.

Catch up on Ian’s adventures in the first Port City Mystery, Killer Cuisine, coming soon to the North Carolina Collection in Wilson Library.