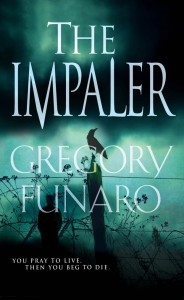 FBI Special Agent Sam Markham barely has a day to adjust to his new home in Quantico, Virginia before his boss comes calling. Another body has been found in Raleigh, North Carolina: bound, gagged and horribly impaled, just like the first two. Even though Sam is still recovering from an exhausting case in Tampa as well as dealing with the impending execution of his wife’s murderer, he doesn’t hesitate. He goes to Raleigh to hunt down the killer the press is calling the Impaler. But finding the killer is easier said than done– the Impaler has his own strange codes, symbols, and portents that lead Agent Markham and the rest of the FBI on a twisted journey through Babylonian mythology, the Iraq War, and medieval Romania.

Edmund Lambert works by day as an assistant in the theater at local Harriot College, but by night, he is the General. Meticulous in his plans, the General is laying the way for the Prince to return to Earth…but in order to do that, the General must kill. Within the ancestral Lambert family farmhouse, he reeducates his victims, and topping their headless corpses with the taxidermied head of a lion, uses them as a sacred door through which to communicate with his Prince. The hour of the Prince’s coming is getting closer, andLambert must ensure that all is in perfect readiness.

As the body count increases almost daily, Agent Markham employs all of his skills to find this monster before it’s too late. But will his work be enough? A grisly psychological thriller, this prequel to The Sculptor leaves the reader pondering the thin line between cop and killer.