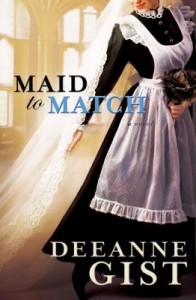 Tillie Reese has only ever had one dream: to become a lady’s maid and travel the world with her mistress. It’s 1898, and she’s currently the chief parlor maid at Biltmore, the grand estate built by George Washington Vanderbilt just outside of Asheville, North Carolina. Opportunity strikes when Bénédicte, Mrs. Edith Vanderbilt’s French lady’s maid, leaves her post. As Tillie prepares herself to compete with another ambitious maid interested in the position, fate intervenes in the form of a new footman.

Mackenzie “Mack” Danver is not accustomed to polite society. He’s been highly educated, but his upbringing in a cabin in the Unaka Mountains combined with a short temper cause most city dwellers to dismiss him as an uncouth, wild mountain man. However, his twin brother, Earl, works as a footman in the service of the Vanderbilts, and when Mrs. Vanderbilt accidentally meets Mack, she can’t wait to employ him and show off her pair of matching footmen. Tall, muscular, and handsome, Earl and Mack make quite an impression in their livery. Mack isn’t happy with the idea – he would much prefer the freedom of his mountains. But his parents are dead, and his younger siblings are in the clutches of a nefarious orphanage director. Mack has to work if his brothers and sisters are ever going to have a good home again, and the Vanderbilts pay very well.

Mack’s regrets quickly disappear, however, when he sees Tillie for the first time. In fact, it’s love at first sight for both of them, but a lady’s maid isn’t married, and Tillie refuses to give up on that dream. As a lady’s maid, she would wear the same fine clothes as Mrs. Vanderbilt, be exposed to art and science, and have the money to take care of her family while also giving to those in need. Is there any way for her to follow her heart, while still fulfilling her dreams?

A sweet love story from the Gilded Age, Deeanne Gist’s Maid to Match will enchant lovers of well-researched, inspirational romance.