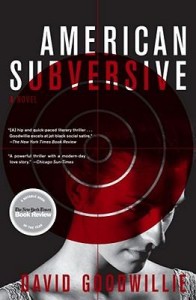 Aidan Cole is only thirty-three, but his privileged existence in New York City has become an embittered one. Roorback (a word meaning a false or slanderous story used for political advantage) is the digital baby that has brought so much heaviness to his once idealistic life. A blog devoted to gossip and news, all served up with a healthy amount of disdainful sarcasm, Roorback was invented and is maintained by Aidan to great success, but it has now taken up so much room in his world that he has nowhere to go but deeper into his own malaise and disinterest. Even a mysterious explosion above world-famous Barneys quickly fades into the background of his routine. Outside of Roorback, Aidan’s life is a mixture of hip parties and expensive dinners with his fashionable Times columnist girlfriend Cressida. Then, someone sends him a brief but electrifying email: a photograph of a young woman walking away from the smoking explosion over Barneys, accompanied by a single sentence: This is Paige Roderick. She’s the one responsible.

Spurred into action, Aidan sets out to find the mysterious Paige Roderick…and stumbles into a world of secrets, eco-warriors, and fanatics. Set partially in North Carolina, American Subversive is a gripping portrait of a generation whose greatest enemy is its own boredom. Through the eyes of two very different but strikingly similar individuals, Goodwillie’s tale chronicles their efforts to develop meaningful voices and find anything in which to believe in a disinterested, mortally hip world.