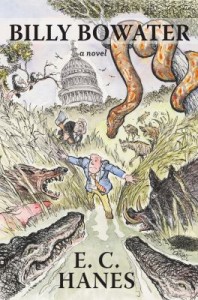 It’s 1990 and an art exhibit on a college campus provides just the kind of issue that Senator Wiley Hoots’s campaign staff wants.  Hoots is the senior senator from North Carolina.  He’s a conservative true believer and a rough campaigner.  Seniority has put Hoots in line to head the Senate Foreign Relations Committee.  This fits with Hoots’s recent view of himself as a senior statesman, but clout in foreign affairs is not enough to turn out the voters, or to get the flood of small donations that have always floated the senator’s campaigns.  No, the campaign needs an issue that will make voters mad and scared, something that will get them talking to their friends, yelling at the TV, and writing checks to the senator’s campaign committee. The senator’s daughter provides the issue when she writes to her father to complain about an exhibit on the UNC-Chapel Hill campus.  Photos of naked girls embracing, a painting showing public urination, and so many other examples of bad taste and moral chaos!  At a public university–and paid for with tax dollars.  Bingo! A campaign issue is born.

The late Senator Jesse Helms’s crusade against the National Endowment for the Arts is clearly the inspiration for this plot, but the novel doesn’t focus on the senator.  Rather, we see the campaign–all the scheming, in-fighting, spinning, and collateral damage–through the eyes of the senator’s chief administrative assistant, Billy Bowater.  Billy, a member of an esteemed eastern North Carolina family, has been with Senator Hoots for five years.  His father, a politically connected lawyer, got the placement for Billy when Billy’s drinking and boredom with small town lawyering threatened the family’s reputation.  Billy has thrived in Washington–the bright lights, the intrigue, the nearness to power thrill him.  That thrill allows him to ignore his dislike for the senator, his politics, and the other members of the senator’s team.  Billy’s true feelings bubble up from time to time, especially when he is with Lucy Sue Tribble, a reporter for the Raleigh paper.  Readers follow Billy as the campaign swings into high gear.  This likely won’t be the senator’s last campaign, but will it be Billy’s?