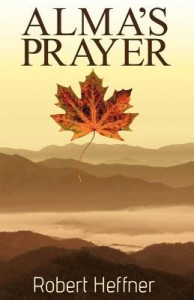 Now that we’re in the sesquicentennial of the Civil War, we’re being treated to movies, websites, and articles about the politics and battles of that sad war.  But all wars have a home front, and the Civil War home front is the setting for Alma’s Prayer.  Alma is Alma Hawkins, a widow living the the mountains of western North Carolina.  Despite Alma’s pleas, her oldest son, Virgil, left their mountain farm to join the Confederate army. Virgil volunteered for a six month enlistment, but as the novel opens CSA President Jefferson Davis has just signed a new conscription act which calls all men eighteen and over into service and cancels all discharges.

Virgil’s letter telling his family that he’s not coming home reaches them shortly after his wife Jenny announces her pregnancy and Virgil’s brother, Luke, discovers the violence inflicted on a neighboring family whose husband deserted the army.  Luke’s concern for his mother and sister-in-law compels him to visit Virgil’s camp to ask him to come home.  Soon both brothers are on the run from the very posse who so brutally dealt with their neighbors.  This crisply-written novel covers some of the same literal and figurative territory as Charles Frazier’s Cold Mountain.  It is a timely reminder that in wartime sacrifice, fear, cruelty, and bravery are not confined to the battlefield.