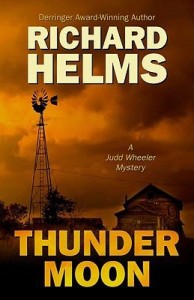 Police Chief Judd Wheeler is a man’s man. He would like nothing better than to have a cold beer while grilling some juicy steaks, spend quality time with his smart and sassy girlfriend, and run the small town of Prosperity in Bliss County, North Carolina with a firm yet fair hand. But during the hot summers, when the air lies like a humid weight on the wilting farmland, folks get as unpredictable as heat lightning. Teenagers have idle hands, tempers shorten, and air conditioners quit at the worst possible moments. It’s nothing Chief Wheeler can’t deal with…usually.

But this summer is different. A star football player named Steve Samples is brutally hacked to death in a home he’s renting from the mayor, who happens to be Judd’s closest friend. A convicted sex offender wants to settle down and build a home, making his neighbors uneasy. Two biker gangs, the Outlaws and the Vandals, start a turf war. Alvin Cross, an itinerant preacher, blows into town and starts riling up Prosperity’s residents over all the sin in their midst, with possibly violent consequences. Worst of all, Chief Wheeler suspects that these events are somehow related, but can’t quite see how. He knows things might get clearer if he could get his hands on the good-for-nothing Ricky Chasen, a murderous young man whose name keeps coming up in ominous ways, but Chasen is as elusive as a shadow.

Will Chief Wheeler be able to keep Prosperity from dissolving into a hotbed of crime and murder? Who killed Steve Samples? What is the preacher’s  true agenda? As the summer wears on and Judd gets closer to the truth, he finds himself living in the cross hairs of a killer…or several. Find out what happens in Richard Helms’ second Judd Wheeler mystery, the explosively named and natured Thunder Moon.

Things are changing in Prosperity, North Carolina.  Farm land is being bought up to create upscale suburban developments, and longtime residents are uneasily adjusting to new neighbors who “aren’t from around here.”  Yes, there is tension in the air.  Still, police chief Judd Wheeler and everyone else is shocked when Prosperity has its first murder in almost a decade.

When the body of a young Latina is found at Six Mile Creek, Chief Wheeler’s investigation uncovers painful things about his community.  He’s known for some time that there are racial tensions at the school, but he is dismayed to learn from his son and his girlfriend, who is a high school teacher, the ugly way that racism mixes with drug use, snobbery, and teenage sexuality.  The town fathers want the murder solved, and solved in a way that places the blame on the victim and her community.  Wheeler won’t do that, but as he investigates the girl’s relationship with some star high school athletes, more violence happens–fights in the school, a horrific assault on a Latino boy, and the beating of an Anglo football player in a high school restroom.  Are all these crimes related?  Are they all the work of high school students, or are the students pawns in games played by others in the community?  And why does the Department of Homeland Security come to town?  The multiple strands of this dark mystery come together in a satisfying conclusion.