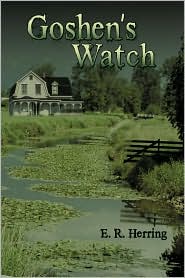 Jaysie Curtis and her husband Kayle lead a quiet life in Traverstown, a fictional hamlet in North Carolina’s Piedmont region. Bordered by a marsh known as Goshen’s Swamp, the town has remained a sleepy backwater in spite of encroaching developments and highways. In fact, when the town attempted to build a major thoroughfare through the swamp, the project failed within a matter of days, and most troubling of all, the entire road crew disappeared.

They aren’t the only ones. Lately, strange disappearances have become the norm in Traverstown. If someone lives in a reckless way, endangers other members of the community, or is just plain mean, he or she will vanish without a trace. As time goes on, some people even claim to see these wicked individuals disappearing in clouds of acidic steam. Community elders declare that “Goshen is angry,” and it certainly feels as though something supernatural is afoot. But what kind of force is ridding Traverstown of unsavory individuals? Is this entity out for justice … or blood? Jaysie’s voice guides us through this spooky tale, but at times it feels as though the narrative takes on the unsettling perspective of whatever resides in Goshen’s Swamp itself.