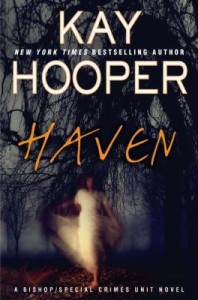 Jessie Rayburn is having nightmares. Which is even worse than one might think, because as a psychic, all of Jessie’s experiences with human emotion are amplified. She’s safely ensconced in Haven, the FBI’s Special Crimes Unit headquarters in New Mexico, but visions of young women being tortured in Baron Hollow, North Carolina are leaping out at her as clear as if she were really there. Unsurprising, perhaps, since Baron Hollow is her hometown, but Jessie knows something is wrong. Disguising her intent by arranging for a vacation home, Jessie drives across the country to the town, and sister, she ran away from fifteen years ago.

Emma Rayburn is surprised when Jessie announces her visit. They never had much in common, especially since Jessie, the elder, was psychic. Two sisters with wildly different personalities under one roof is hard enough, but when one sister can read the other’s thoughts? That’s a recipe for disaster. Since Jessie left, Emma has turned their palatial ancestral home into a popular bed and breakfast, and has been running it with a steady hand. But a riding accident a few weeks ago has disturbed Emma’s peace– she’s been having horrible nightmares about young women being tortured, and has no way to explain their existence. Jessie is the psychic one, so these dreams can’t mean anything…can they?

The first rule all psychics know is that coincidences are rare. While the sisters’ relationship may be fraught with tension, a black cloud rests on Baron Hollow, and that supersedes all other concerns. Young, female hikers have been mysteriously disappearing for years, and somehow no one has noticed. Could it be that the killer is not only very careful but also skilled in more subtle modes of mental deception? Could it be that the killer is also a psychic? Emma and Jessie, along with several other Haven operatives,  work to solve the case before anyone else goes missing, but this killer is smart, deadly, and tangled in their own personal histories.

Kay Hooper provides a thrilling continuation in this, her thirteenth novel in the Bishop/Special Crimes Unit series. Divided into sub-trilogies featuring different psychics on the team, each novel can be enjoyed independently, as a part of its own trilogy, or as a part of the overall series. Haven is a fast-paced, exciting addition this repertoire.

Reverend Adam Samuel is using his psychic powers to kill women and, perhaps, to endanger the whole world.  The FBI Special Crimes Unit, under Noah Bishop, tries to put a stop to Father Samuel’s villainy.  Bishop recruits Tessa Gray, an agent from a civilian organization, to pose as a vulnerable young widow who has inherited property next to Samuel’s mountain compound. Tessa has psychic powers, but she is a relatively inexperienced operative. When she arrives at Samuel’s compound, she finds herself surrounded by Samuel’s many fanatical and well-connected followers. Even when she joins forces with the local police chief (who also serves as the novel’s romantic interest), her chances for success look slim.  The back story on Reverend Samuel is horrific, but his crimes are just as troubling to contemplate. This is the second book in a planned trilogy; the first title was set chiefly in Georgia.

Lucas Jordan is a successful profiler for the FBI, using his psychic abilities to track down missing people. When a string of grisly murders hit Golden, N.C., a fictional mountain town, Lucas is called to the case. The psychopathic killer keeps Lucas guessing throughout the book, and raises the stakes when he turns his sights on people close to the detective.