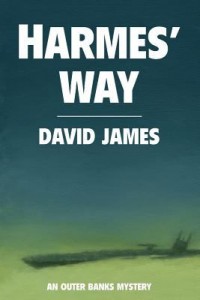 Ben Harmes is an Outer Banks native, but he spent most of his adult life working as a policeman in Boston.  After his wife’s death, an ill-advised second marriage, and over zealous interest in a politically sensitive case, Ben has washed back up on the North Carolina coast.  His daughter Kate, a state park ranger, provides good company, as do a number of easy-going, beer-drinking locals.

One of those locals is Charlie Evans, a good ol’ boy who matches Ben drink for drink.  Charlie can take it easy because his underwater filming company made good money from its part in the recovery of gold from a downed German U-boat just off the coast.  As Harmes’ Way opens Ben, hung over, is rushing to meet Charlie for some early morning surf casting.  When Ben finds Charlie’s SUV, rod, and waders, but no Charlie, his policeman’s instincts kick in.  Even though the sheriff’s deputy suspects nothing more sinister than an accidental drowning, Ben begins to nose around.  He learns from Charlie’s business partner, Sophie Carson, that two men associated with the U-boat film project died under suspicious circumstances just a few months back.  Then Sophie’s house is bombed.  Sophie survives, and she teams up with Ben in a adventures that moves across North Carolina from the Outer Banks, to Wilmington, to Grandfather Mountain, to 100 feet below the surface of the ocean off Hatteras Island.