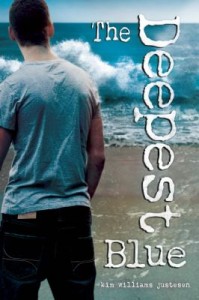 At fifteen, Mike Wilson is a typical teenage boy, with the same concerns as his peers.  His is counting the days until he can drive, and each day he hopes that he will better understand girls and one girl in particular–Rachel, his on-again, off-again girlfriend.  In the meantime he is working this summer, like previous ones, on his father’s charter fishing boat.  Mike doesn’t know if he’ll want to make this boat his future, but he enjoys spending time with his father, Rich.  Rich has been Mike’s sole parent ever since the two of them left Mike’s mom.   Mike was just five when he and his dad moved from Washington State to the North Carolina coast,  but Mike has memories of his mother’s unhappiness and her coldness toward him.  It’s fine with him that he has rarely heard from her these past ten years.

As The Deepest Blue opens, Rich tells his son that he is going to ask his long-time girlfriend, Maggie, to marry him.  Before he offers Maggie a ring, Rich needs to know that Mike will be OK with this change in his life.  Mike is thrilled.  Sure, it will be different, but Mike knows that Maggie and Rich love each other and, in truth, she has been like a mother to him for the past few years.  But before Rich can pop the question, tragedy strikes.  Rich is killed by a drunk driver.  Maggie and Mike are devastated–the future that there were to share has been taken from them.

But perhaps they can have a different future together.  Mike would like Maggie to adopt him, but because he is a minor he is not free to do as he pleases in such an important matter.  And because his age, his mother, Julia,  is notified of her ex-husband’s death.  To everyone’s surprise, Julia asserts her parental rights and makes plans to take Mike to live with her new family on the West Coast.  The Deepest Blue follows Mike and Maggie as they, though grief stricken, try to mange their feelings, bury Rich, and do battle with Julia for Mike’s future.  The story is told from Mike’s perspective, and readers come to see a decent, ordinary boy struggle toward the maturity that he will need to become the person his father hoped he’d be.