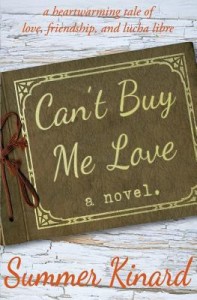 Does love at first sight count when only one person is looking? After Vanessa Fauchon digs three scrapbooks out of a dumpster, she falls in love with an attractive Latino man who appears in the photos. For Vanessa happening upon the scrapbooks was part luck and part routine. Vanessa is a freegan. Freegans, essentially, do not believe in purchasing any consumer products, even for basic needs like food and clothes. Instead, they rely on thrifty thinking and dumpster-diving to make ends meet in a sustainable lifestyle.

Shortly after Vanessa discovers the scrapbooks she breaks up with her deadbeat boyfriend and dumpster-diving partner, Bradley. Although Vanessa and Bradley share physical compatibility, they lack the same long-term desires. In the near future Vanessa hopes for children, while Bradley believes she should get sterilized for the good of population control. Bradley is a vigilant freegan and wields his ideology to shirk responsibility. Vanessa suspects that Bradley is lazy and masquerades that fact behind his tenet of simplicity. If he does not receive something free out of an encounter, then Bradley has no interest in exerting any effort.

Fortunately, Vanessa is a member of Fructus, a women’s group that meets to socialize, crochet, and support one another. Fructus has a range of strong, unconventional female members, from a luchadora to an ethics professor. The women of Fructus help Vanessa during her weakest times and implore her to seek out a more fulfilling relationship. Bradley is a leech of a character and Vanessa struggles to remove him from her life. By contrast to Bradley, Vanessa is a hard worker who tends bar at a local brewery. One night, in a moment of complete serendipity, she recognizes a familiar face from across the bar–a face that bears an uncanny resemblance the handsome visage of the Latino man in the foraged scrapbooks. Although Can’t Buy Me Love revolves around a peculiar love story, the friendships between the female characters are the crux of the novel.

Summer Kinard, a first-time novelist, has an educational background in religion. She earned her M.Div and Th. M. from Duke Divinity School and elements of her interest in religion emerge throughout the book. Moreover, her knowledge of Durham is evident. She references several local attractions and businesses around the city such as Duke Gardens, the Carolina Theatre, and Locopops. Readers acquainted with the Triangle area may delight in the recognizable portrait of Durham that Kinard has rendered in her novel. All readers can enjoy Kinard’s magical and seemingly improbable love story.