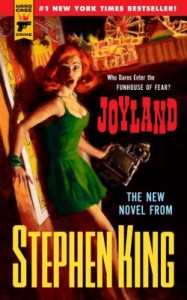 Joyland is an amusement park in the business of selling fun – and that’s by the “seat-of-the-pants” fun not that “scripted” fun that Disney peddles to its customers, according to geriatric park owner, Bradley Easterbrook. Joyland has all the standard amusement park fare: rides, refreshments, a crackpot fortune-teller, a beloved mascot, and a haunted house. Except Joyland’s haunted house really is haunted. Or so twenty-one year-old Devin Jones is told. In the summer of 1969, Linda Gray spent the day at Joyland in the company of an unidentified male masked in sunglasses and a baseball cap with a bird tattoo on his hand. Later in the evening, the pair entered the Horror House together, only Linda never left. Linda’s companion slashed her throat and left her body inside, where it was discovered the next day. Four years later in 1973, the killer still roams free. Since the murder, employees have reported sightings of Linda’s ghost.

When Devin first hears the tale, he is more concerned with relaying it to his disinterested girlfriend Wendy Keegan than focusing on the lurid details. Wendy is the first thing on Devin’s mind and he is the furthest thing from hers. Devin eagerly fantasizes about his life with Wendy following their graduation from the University of New Hampshire. He dreams of a successful literary career and wedded bliss completed with a few kids running underfoot. His unquenched libido and earnest schoolboy devotion blind Devin from the fact that Wendy is slipping, or rather pushing, away from him. Wendy plans to work in Boston with a friend during the summer and she encourages Devin to take a job far away at Joyland in the small, fictional town of Heaven’s Bay, North Carolina. Their break-up is predictable, and Devin spends a good portion of his time ruminating on first love.

Then he becomes absorbed into the world of Joyland. He finds friends, “wears the fur,” learns the park lingo, and juggles a million menial tasks at once.  Howie the Happy Hound is Joyland’s mascot and all the Happy Helpers take turns in wearing the dog costume. During the summer, shifts are restricted to 15 minutes to prevent heatstroke. Devin, though, dons the suit repeatedly. Despite the discomfort, he discovers an unexpected enthusiasm for wearing the costume and exciting children at the park. Reflecting back on his time at Joyland, Devin muses that no job has satisfied him as deeply as dressing as Howie and dancing the Hokey Pokey.

Veteran novelist Stephen King establishes a convincing atmosphere in Joyland with his use of colorful carny slang. The book features a pulpy cover design and is marketed as a hardboiled crime novel, although Devin is an inadvertent sleuth rather than a jaded detective. Joyland is a bildungsroman meets murder mystery. King’s focus is less on the horror and gore and more on Devin’s maturation. Solving Linda Gray’s murder just falls on the laundry list of Devin’s pivotal summer of development. By deemphasizing the mystery aspect of the novel, Joyland becomes a more dimensional story and quite an exhilarating ride of a read.