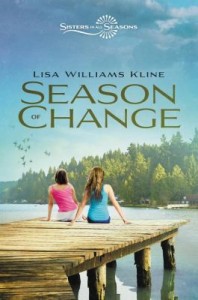 In Season of Change, the fifth and final installment of the Sisters in All Seasons series, Diana and Stephanie have returned with new challenges. The stepsisters overhear fighting between their parents, Lynn and Norm, and Stephanie unwittingly finds a brochure advertising marriage counseling in their bathroom. While the thought of another divorce makes Stephanie distraught and anxious, Diana acts nonchalant and indifferent about the evidence of marital discord. She tells Stephanie not to worry about the conflict. In Diana’s experience, not fighting is much worse than fighting.

Soon after the girls suspect trouble, Norm and Lynn announce that they are taking a quick weekend vacation to reconnect and refresh their relationship. They have decided that Stephanie and Diana will stay for the weekend with Lynn’s parents who live on Lake Norman. Stephanie feels uncomfortable with that arrangement. She believes that her presence at Diana’s grandparents will be unwanted and out-of-place since she is their granddaughter through remarriage and not by blood. Her sensitivity is heightened because she is already nursing an open wound. Stephanie’s mother has been consistently unavailable when Stephanie has needed her the most, devoting her time to her new husband, Barry, instead of her daughter. The weekend of Norm and Lynn’s vacation, Stephanie’s mom has a trip to Asheville planned with Barry and she does not intend to cancel it for Stephanie. Meanwhile, Diana faces difficulties with her horse, Commanche, who has gone lame. She visits and cares for the horse, but she cannot ride him and is not certain when he will be well enough to ride again. Diana is also practicing driving, and not without some usual parental stress and novice mishaps.

Throughout the series, Stephanie and Diana’s relationship has been rocky. Neither girl felt they could understand the other; shy and nature-loving Diana and social and artistic Stephanie clashed at first. They each wanted to sever the relationship between Norm and Lynn. Now, with what looks to be another potential divorce, the girls are starting to question their initial desires and to understand that they have grown more attached to each other than they realized. Do they really want to be separated? What will happen when Norm and Lynn return from their weekend vacation? Novelist Lisa Kline has penned another absorbing book in her Sisters in All Seasons series. Diana and Stephanie are relatable characters, and their problems and adolescent milestones – divorce and family strife, boy trouble, summer jobs, driving, and more– are realistically portrayed. This is a great read for teen readers and readers fond of young adult novels to sneak in before the end of the summer.

To start at the beginning, take a look at the posts written on the previous volumes in the series: 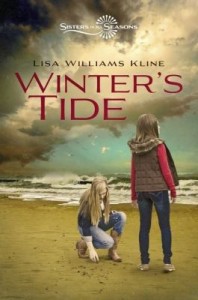 Stepsisters Stephanie and Diana have come to an uneasy truce over the last few years, but it’s still hard to get along. In Winter’s Tide, the fourth installment in the Sisters in All Seasons series, the girls face challenges within their two intertwined families and with each other.

When a popular girl walks by Diana in the hall at school and whispers that hateful nickname all the kids call her, “annnnnn-i-mal,” under her breath, Diana finally snaps. Both girls are suspended for fighting just before Christmas, and Diana’s mom and dad couldn’t be more disappointed. Stephanie feels terribly guilty, since it’s her fault that Diana gets called “annnnn-i-mal,” but she’s worried that if she reveals her secret, Diana won’t understand that it wasn’t intentional. Both girls are distracted, however, when tragedy strikes Stephanie’s side of the family.

First, Stephanie’s stepbrother from her mom’s re-marriage is driving drunk and gets into a car accident on Christmas Eve. Matt has always been mean to Stephanie, so she refused to say a prayer for him in church that night. Now this car accident feels like her fault, too. Next, Grammy Verra, Stephanie’s favorite grandparent, falls ill. Since it’s winter break, Stephanie, Stephanie’s dad, Diana, and Diana’s mom all drive down to Emerald Isle, North Carolina to stay near her. Diana is immediately entranced by the nearby animal life, including whales, horses, and even Grammy Verra’s dog, Jelly. When the girls meet a local boy, Jeremy, trouble begins: he takes them out on a secret trip on his dad’s boat to see the horses on Shackleford Banks, and everything goes wrong. Stephanie’s secret comes out, and the boat starts to float out to sea, potentially leaving them stranded. Will the sisters be able to reconcile, and will they find a way to get out of danger? If so, will Grammy Verra and Matt be OK? And will Diana finally be able to move past her bullies?

Diana Williams and Stephanie Verra are back in this third book in the Sisters in all Seasons series. This time, the two stepsisters join Stephanie’s extended family on a cruise to the Caymans to celebrate Grammy Verra’s seventy-fifth birthday.

It’s hard for Diana to leave her regular haunts in North Carolina behind, but the islands hold many exciting new adventures. Unfortunately, Stephanie’s annoying cousin Lauren is also on the cruise, and Diana must learn to get along with her as well. The socially adept Stephanie quickly gets tired of mediating between her cousin and her stepsister, while Lauren just wants to videotape her trip and finds it annoying when Diana won’t agree to take part. But when an animal is in trouble on the ship, all three teens band together to help. As usual, each girl learns valuable lessons about herself, the natural world around her, and interacting with others.

Young adults will enjoy this thoughtful addition to a series that follows the difficulties of growing up, going to high school, and learning to get along with new family members. 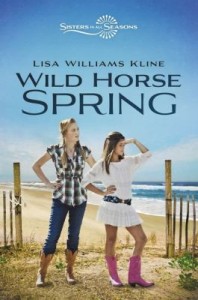 Fourteen-year old stepsisters Stephanie and Diana bonded last summer, despite having two very different personalities and struggling with their parents’ new marriages. Socially adept but squeamish Stephanie learned to be braver and to take risks during a family vacation at a ranch in the mountains, and outdoorsy but awkward Diana finally reached out to her new sister. But now a whole year has gone by, the first one in which both girls attend the same school. Diana still doesn’t fit in and gets made fun of, while for Stephanie making new friends is effortless. Diana is jealous and hurt and pulls back from their budding relationship.

Stephanie doesn’t understand what makes Diana tick. She’s been sweet and kind to her, just as she is to everyone. But Diana refuses to let her in, retreating into her passion for horses and other animals. Stephanie’s problems don’t stop with Diana: she lives primarily with her mother and her mother’s new husband, along with his 18-year-old son Max. Max calls Stephanie names and drinks behind their parents’ backs. Stephanie yearns to live with her dad Norm and Diana’s mom Lynn, but she’s afraid to ask. When Norm, Lynn, Stephanie, and Diana all go to a beach rental on the Outer Banks for the girls’ spring break, Stephanie hopes she can work up the courage to tell her father what she really thinks, even if it means making things difficult for the adults.

But if Stephanie is considering causing problems, Diana can be counted on to stir up trouble. This time it’s the wild horses that roam Currituck’s beaches: Diana becomes obsessed with them, and keeps running off to find the herds. When she discovers a hurt mare hit by a vehicle, nothing will satisfy her but to find the perpetrator, and Stephanie is once more party to her stepsister’s determination. Will the two be able to overcome the new obstacles in their relationship and find out who injured the horse? 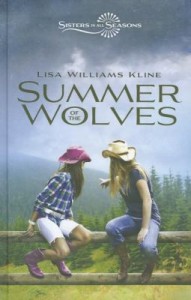 Stephanie and Diana are like night and day: blonde Diana loves the outdoors, and gets along with animals better than people. Dark-haired Stephanie is artsy, social, and fashionable. Each regards the other’s world as alien to her own. Unfortunately, Stephanie’s dad and Diana’s mom have just gotten married, and the two new stepsisters are pushed into a “family” vacation at a ranch in the North Carolina mountains. Stephanie is horrified that she’ll be expected to participate in activities like trail riding and white-water rafting, while Diana is angry that she’ll be held back by her stepsister’s reluctance. Stephanie actually wants to be friends, but Diana is so angry that civil interaction is barely possible.

With the family shift weighing down on both of them, the vacation does not start well for the girls. Stephanie nearly falls off a horse, and Diana is even more annoyed when her socially skilled stepsister starts making friends with other children right away. But then Diana discovers the wolves: two part-wolf, part-dog hybrids that a local man keeps for show. Diana’s heart goes out immediately to the skinny, frightened creatures, who are kept in a small pen with little food or water. She determines to free them, and when Stephanie catches wind of her plan, the usually cautious brunette decides to help Diana. Together they free the wolves, but their actions have far-reaching consequences that they didn’t consider. The girls must help those who wish to bring the wolves safely home, realizing along the way that they’re more similar than they thought.