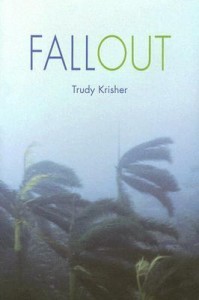 Starting high school can be an unnerving yet exciting experience, full of change. For Genevieve Hardcastle, a teen in the 1950s, starting high school is beyond intimidating. That feeling is made all the scarier by the fact that her only friend, Sally Redmond, has moved far away, up to New Jersey. Genevieve likes being a wallflower. Genevieve doesn’t want to be embarrassed, and attention is the surest route to embarrassment. Last year, Genevieve had a taste of gossip and backbiting when she helped Sally in her campaign for class secretary. After witnessing Janice’s smear tactics, the already shy and awkward Genevieve has become even more cautious. She aims not to stand out, lest Janice Neddeger or one of her sidekicks catch her in the crosshairs and single her out in front of everyone.

Her mother, Martha, wishes Genevieve was more of a “go-getter” kind of girl. Martha (a homemaker and president of the town of Easton’s Welcome Wagon) encourages Genevieve to make friends, but to no avail. Even if Genevieve wasn’t quiet, she blames her parents for making developing friendships a little difficult. Between the plastic-covered furniture, her mother’s over-eager, hyper-positive attitude, and her father’s suspicious lurking around the house, Genevieve observes that her family and its dysfunctions aren’t as wholesome as Ozzie and Harriet. Genevieve’s father, George, is a solemn actuary, obsessed with disaster and disaster preparations. He also hangs on Senator McCarthy’s every word.

The coastal town of Easton is used to its familiar, traditional ways. The locals, Genevieve included, know when to sense an impending hurricane and how to prepare, for instance. They’re pro-American and pro-atom, and anti-Red. But all that changes when a new family moves to town. The Wompers — Harry, Patricia, and Brenda — are from California, although from the way Easton folk receive them, it seems they might as well come from outer space. The townspeople of Easton are taken aback by the Wompers’ strange ideas and expressions – their belief in raw food, their decision to eliminate sugar from the drug store they purchased, their atheism, and, most of all, their challenge of the Civil Defense curriculum with claims that the atomic energy is dangerous.

The Wompers don’t fit the standard mold. Mrs. Womper is a physicist who gives little regard to dressing in the style of all the other housewives; she favors sandals over heels. Before they moved, Mr. Womper worked in Hollywood, in the film industry. Brenda is outspoken and brave. She isn’t afraid to question her fellow students, or even her teachers. The Wompers’ open-minded skepticism and differences are frowned upon by Easton, and by Genevieve’s parents. But the girls bond after Genevieve’s algebra teacher assigns Brenda as Genevieve’s tutor.  They’re a pair of opposites. Genevieve is mesmerized by Brenda’s straightforward bravery; she describes herself as a hermit crab, self-protective and scuttling out-of-sight. Brenda lives by a set of “Rules for Thinking,” to question any belief, whether seemingly true or false, with detachment. Her dogma prompts sensitive Genevieve to eventually challenge Brenda’s scientific view of the world.

Fallout is set against the political atmosphere of the Cold War and the constant threat of an atomic bomb scare, and the literal atmosphere of a coastal North Carolina town during the thick of hurricane season. Trudy Krisher wisely plays the political and meteorological atmospheres against the distress and distrust of new people and new ideas in a traditional small town. The novel develops Genevieve’s character believably. At the beginning of the novel she’s a shrinking violet. By the end she isn’t fearless, but she’s less afraid, and her awareness of the world and powers of introspection have been honed. While the book cover indicates that Fallout is marketed for young adults, Trudy Krisher’s novel is a thought-provoking read, perfect for the upcoming summer.