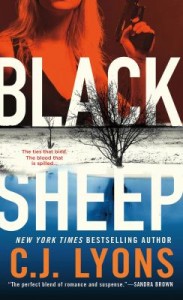 Caitlyn Tierney likes to keep her enemies closer than her friends. In fact, she doesn’t like to be close to her friends at all. A skilled FBI agent, Tierney is a loner by choice. She pushes away well-meaning coworkers trying to bond and casual boyfriends interested in getting serious. Caitlyn isn’t much of a rule-follower. Sometimes her unorthodox approach ruffles the attitudes of more rigid agents. She suspects they would like to goad her into quitting. Tierney doesn’t have total contempt for standard regulations and textbook procedures though. She just recognizes that bad guys don’t play by the rules, so occasionally the good guys can’t either, not if they want to win.

Without friendships, Tierney’s life is her work, and she feels no regrets for committing herself fully to her job, even though it has nearly killed her twice. She is dedicated to her career despite recent difficulty that has left her scarred, literally and figuratively. However, Caitlyn is no stranger to trauma. And regardless of the physical danger and the strict protocol, she loves teaching fledgling officers. Also, her work fulfills her beloved, deceased father’s unrealized aspiration of joining the FBI.

Caitlyn grew up in the fictional mountain town of Evergreen, North Carolina. Her father, Sean, dreamed of joining the FBI, but once he met Caitlyn’s mother, Jessalyn, he abandoned his goals and became a sheriff’s deputy instead. Love overruled his ambitions. Although Sean found contentment in a future different from his initial life plan, Jessalyn never seemed satisfied with their lives. The Tierney family’s farmhouse and their small-town disappointed Jessalyn. She juggled two jobs and strove to improve their standing. When Caitlyn decided to join the FBI, Jessalyn did not approve of her only child’s career choice. Rather, Jessalyn considered it a waste of all her effort to improve the family’s stature. Needless to say, Caitlyn and Jessalyn’s relationship is strained.

But mysterious circumstances surrounding Caitlyn’s father, Sean, and her childhood friend Vonnie’s father, Eli Hale is the major source of strain within the Tierney family. After Eli was accused of murdering a Cherokee tribal elder, Sean was forced to arrest him. Like Caitlyn and Vonnie, Sean and Eli were close friends, so the arrest disturbed Sean. He argued in defense of Eli and believed firmly in his friend’s innocence. Sean’s persistence came close to costing him his job. More unfortunately however, it cost him his life. After the toll of sticking up for Eli, Sean committed suicide. Eli was convicted. And Caitlyn carried indelible scars into her future.

Now, twenty-six years later, the man Tierney holds responsible for her father’s death attempts to contact her. Eli’s youngest daughter Lena has gone missing and he begs Caitlyn to help look for her. At first, Caitlyn refuses to listen to Eli’s desperate request. Strong, unsettled memories of the past draw her into the case. Before she went missing, Lena was rooting around for evidence to verify her father’s innocence. During the unofficial manhunt, Tierney runs across a distinctive collection of clues–zoo animals, a casino, and a motorcycle club–that relate to Lena’s disappearance and her father’s strange suicide.

Before she started writing, novelist C.J. Lyons was a pediatric ER doctor. This is her second novel focused on FBI agent Caitlyn Tierney, yet it could be read easily as a stand-alone story. Lyons’ first Caitlyn Tierney novel was Hollow Bones. Black Sheep packs a surprising ending that might hoodwink even the best armchair mystery detectives.